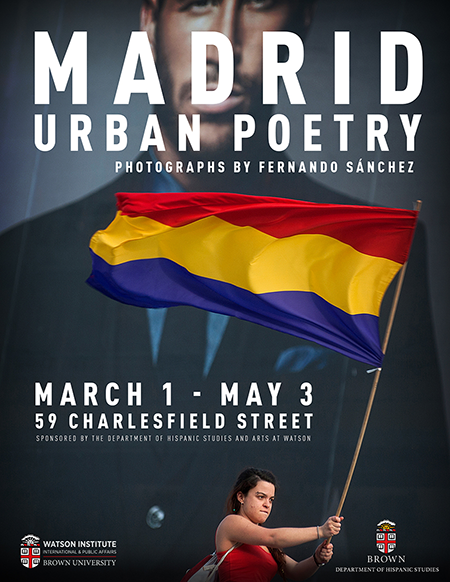 This exhibition focuses on the effects on Spain’s capital of the Great Recession, which reached its height in Spain in 2012, when overall unemployment rates reached over 25% and youth unemployment rates surpassed 55%. Today, the country is still recovering from an unemployment crisis and subsequent austerity measures that crushed the lives of people between the ages of 16-35 who have come to be known as la generación perdida (“the lost generation”).

Photojournalist Fernando Sánchez’s most personal exhibition, “Madrid, Urban Poetry” is composed of 20 photographs taken between 2011 and 2017. It shows the Spanish capital’s many faces, of all shapes and sizes and expressions. Through portraits of everyday life, it captures how Madrid has been shaped by the passing of time amidst the Great Recession. The photographs chronicle a city in a state of continuous movement, featuring the happy, bitter, hard, and real moments with which people have confronted their daily existence during the country’s economic crisis. Showcasing the economic divide between center and periphery at the heart of Spain’s largest metropolitan area, the photographs register the fissures that even the tourist areas of downtown Madrid can’t entirely conceal. The exhibition juxtaposes symbols, metaphors, and emotions as a way of inviting you to rethink the relationship between economics, politics, and the visual representation of ‘crisis.’

Fernando Sánchez is one of the leading photojournalists in Spain. He began his photographic work for the newspaper Público in 2008 and, since 2012, has worked for the newspaper La Marea. He was a finalist for the FOTOCAM award in 2012 and 2014 for his work documenting the effects of Spain’s economic crisis. He has exhibited his work in Madrid, Barcelona, and elsewhere in Spain.

Art at Watson
Arts and Culture

Cosponsored by the Department of Hispanic Studies and Art at Watson.