The Bias Within: False Beliefs about Bodies and Minds 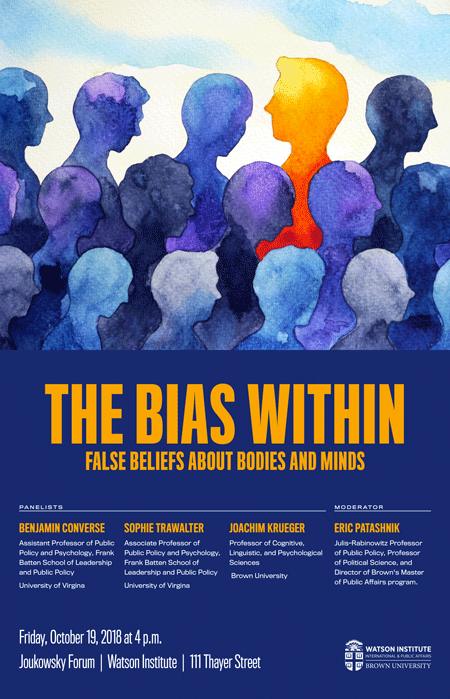 We do not have direct access to others’ mental lives, to their thoughts, feelings, or beliefs. And yet, daily, social interactions proceed according to guesses about what others think, feel, and believe. Sometimes, such inferences about others’ personal subjective experiences are the basis of formal and consequential judgment processes. For example, doctors decide how to treat their patients based in part on guesses about what those patients are feeling; judges and juries decide how to rule on cases based in part on guesses about what the accused was thinking.

This panel will discuss original psychological research, as well as broader conclusions and open questions, about how such mental-state inferences occur in institutionalized contexts, in some cases with life or death consequences.

First, Professor Sophie Trawalter will discuss how patient race affects medical treatment for pain. Offering a partial explanation for the established observation that Black Americans are systematically undertreated for pain relative to White Americans, Trawalter’s research demonstrates that the bias in treatment recommendations is related to false beliefs about biological differences. The discussion will then shift to a courtroom context and norms or rules related to how evidence is presented. Professor Benjamin Converse will discuss research documenting a “slow-motion bias,” whereby slowed (vs. regular-speed) replays systematically increase judgments of intent, potentially changing the likelihood of convicting someone of second- versus first-degree murder.

Benjamin A. Converse is an assistant professor of public policy and psychology, with appointments in the Frank Batten School of Leadership and Public Policy, and the Department of Psychology. Using the tools of social psychology and judgment and decision making, he investigates basic psychological processes – such as motivation, social judgment, and inferences about others’ mental states – that have critical implications for management, leadership, and policy. Converse received his Ph.D. in Managerial and Organizational Behavior from the University of Chicago Booth School of Business and his B.A. in Psychological and Brain Sciences from Dartmouth College. At the Batten School, he teaches Psychology for Leadership and Strategies & Processes of Negotiation.

Sophie Trawalter is an associate professor of public policy and psychology, with appointments in the Frank Batten School of Leadership and Public Policy, and the Department of Psychology. She studies psychological processes that contribute to social disparities. Prior to joining the University of Virginia, Trawalter was a postdoctoral fellow at the Institute for Policy Research at Northwestern University, received her Ph.D. in Psychological and Brain Sciences from Dartmouth College, and her B.A. in Psychology and B.S. in Mathematics from the University of North Carolina at Wilmington. Among other courses at Batten, Trawalter has taught Value and Bias in Public Policy and Wise Interventions: Psychology for Public Policy.

Joachim Krueger is a Professor of Cognitive, Linguistic and Psychological Sciences. He came to Brown in 1991 after attending graduate school at the University of Oregon (a glorious experience; PhD, 1988) and postdoctoral years at the Max Planck Institute in Berlin. His research covers a variety of topics in social judgment and decision-making, such as self-perception, strategic interpersonal behavior, and intergroup relations. He is intrigued by the intersections of cognitive-social psychology with behavioral economics and organizational behavior. Trust, power, and leadership are recurring themes in his research and teaching. When in a post-humanistic frame of mind, he extends his explorations to questions of creativity and happiness.

Patashnik is the editor of the Journal of Health Politics, Policy and Law. He is also Nonresident Senior Fellow at the Brookings Institution and a Fellow of the National Academy of Public Administration. Before coming to Brown, Patashnik held faculty positions at the Frank Batten School of Leadership and Public Policy at the University of Virginia, the Luskin School of Public Affairs at UCLA, and the department of political science at Yale University. During his time at UVA, he served as associate dean and acting dean at the Batten School. Patashnik is the author and editor of several books including Unhealthy Politics: The Battle over Evidence-Based Medicine (with Alan Gerber and Conor Dowling, Princeton University Press, 2017), which received the Don K. Price Book Award and Reforms at Risk: What Happens After Major Policy Changes Are Enacted (Princeton University Press, 2008), which received the Louis Brownlow Book Award.