Broken: Can the Senate Save Itself and the Country? 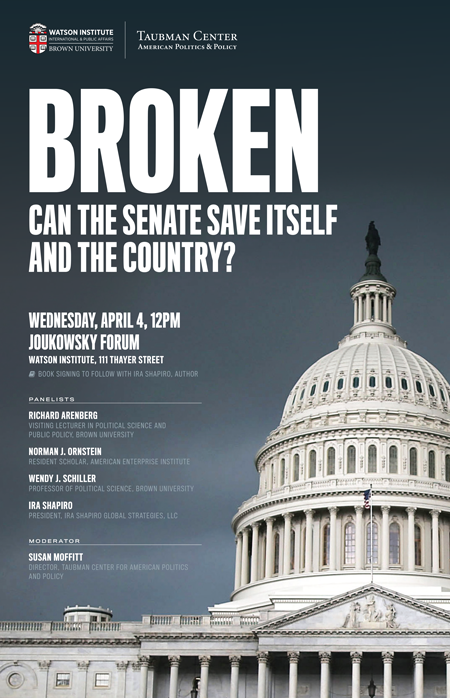 Join panelists Richard Arenberg, Norman Ornstein, Wendy Schiller, and Ira Shapiro for a discussion of the state of the U.S. Senate. The panel will use Ira Shapiro's book Broken: Can the Senate Save Itself and the Country? as a starting point for the discussion. Moderated by Susan Moffitt, Director of the A. Alfred Taubman Center for American Politics and Policy and Associate Professor of Political Science and International and Public Affairs.

Richard Arenberg has significant experience in intelligence matters, Congressional history, procedure, rules and protocol, and the role and impact of Congress on public policy. Arenberg teaches a number of courses related to Congressional politics and policy through Brown’s public policy program and the political science department.

Arenberg spent more than thirty-four years on Capitol Hill in senior staff positions with Majority Leader Senator George Mitchell and Senators Carl Levin and Paul Tsongas. He served on the Senate Iran-contra Committee and helped Senators Mitchell and William Cohen write Men of Zeal, which analyzed those hearings. He co-authored the award-winning Defending the Filibuster: Soul of the Senate and is the author of the forthcoming Congressional Procedure: A Basic Guide to How the Machinery of Legislating Works. The U.S. Senate Historical Office published “Richard A. Arenberg: Oral History Interviews” in 2011.

Norman Ornstein is a resident scholar at the American Enterprise Institute (AEI), where he studies politics, elections, and the US Congress. He is a cohost of AEI’s Election Watch series, a contributing editor and columnist for National Journal and The Atlantic, a BBC News election analyst, and the chairman of the Campaign Legal Center.

Dr. Ornstein previously served as codirector of the AEI-Brookings Election Reform Project and senior counselor to the Continuity of Government Commission. A longtime observer and analyst of American politics and the US Congress, he has been involved in political reform for decades, particularly campaign finance reform and the reform of Senate committees. He has also played a part in creating the Congressional Office of Compliance and the House Office of Congressional Ethics.

Ira Shapiro is the President of Ira Shapiro Global Strategies, LLC, a consulting firm specializing in international trade, U.S.-Japan relations, and American politics, which he founded in 2014. He brings to the firm 40 years of experience in senior staff positions in the U.S. Senate, the Clinton administration, and private law practice. He is also the author of the critically acclaimed book, The Last Great Senate: Courage and Statesmanship in Times of Crisis, published in 2012.

Mr. Shapiro came to Washington, D.C., in October 1975, to work as Legislative Legal Counsel to Senator Gaylord Nelson (D.-Wisconsin). In his 12 years working in the Senate, Mr. Shapiro served as Minority Staff Director to the Governmental Affairs Committee, Staff Director and Chief Counsel to the special Senate Committee on Official Conduct, counsel to Senator Majority Leader Robert Byrd, and was the first chief of staff for Jay Rockefeller.

In 1993 Mr. Shapiro became General Counsel to United States Trade Representative Mickey Kantor. As General Counsel, he played a central role in the negotiation and legislative approval of the North American Free Trade Agreement (NAFTA) and the multilateral Uruguay Round that created the World Trade Organization and the current trade rules. In 1995, President Clinton nominated Mr. Shapiro for Ambassadorial rank, which the Senate rapidly and unanimously approved. Ambassador Shapiro served as the principal U.S. trade negotiator with Japan and Canada, helping to successfully resolve some of the most contentious bilateral disputes with America’s two leading trading partners: autos and auto parts, semiconductors and insurance with Japan, and softwood lumber with Canada.