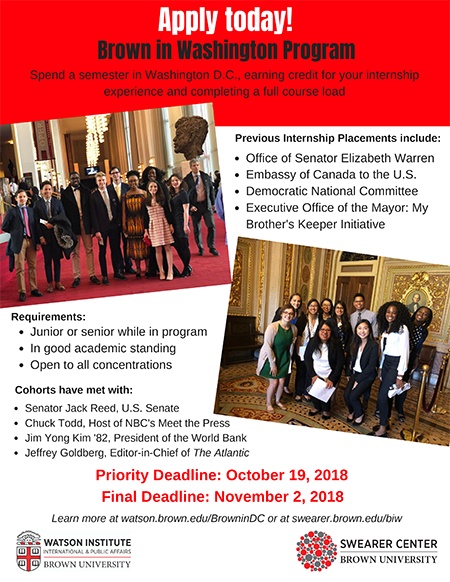 The priority deadline for applications for the spring semester is October 19th. The final deadline is November 2nd. To apply, please fill out the Brown in Washington online application here.

For any questions about the program or application, please feel free to contact us:

John Tambornino teaches in the Brown in Washington Program under the Swearer Center and the Watson Institute for Public and International Affairs. His teaching reflects the animating concerns of his career - political science, public engagement, and social justice – having taught political theory and public policy, and addressed issues of poverty and disadvantage in the U.S., through positions in the Executive Branch, Congress, and in academia. He is Senior Advisor (career staff) in the White House Office of Management and Budget, leading cross-cutting initiatives to strengthen government capacity to use evidence to improve public policy. His prior public service includes serving as Senior Advisor to Congressman Jim McDermott (D-WA) as an APSA Congressional Fellow, serving as Director of Economic Support for Families in the Office of the Secretary at the U.S. Department of Health and Human Services, and in senior career positions at the Social Security Administration and at Health and Human Services. Through these positions, he has connected social science to policy development and program administration, and developed expertise in poverty, disability, public assistance, social insurance, health care, financial services, and program evaluation. He has been faculty at Western Washington University, New York University, and Johns Hopkins University, where he received the Excellence-in-Teaching Award. His academic writings include The Corporeal Turn: Passion, Necessity, Politics (Rowman & Littlefield); with Jason Frank, Vocations of Political Theory (University of Minnesota Press); articles and essays in Political Theory, Perspectives on Politics, Journal of Political Philosophy, Polity, and Theory & Event; and he has authored a variety of government studies and reports. He earned a BA (Phi Beta Kappa/Magna Cum Laude) in Philosophy and Political Science from Macalester College, and a PhD in Political Science from Johns Hopkins, where he was a James Hart Fellow.

Timothy Peltier is a senior at Brown University concentrating in Political Science. His policy interests include education and labor. He is a research assistant at the Taubman Center for American Politics and Policy, working on a study of the Common Core Curriculum. Previously, Tim interned on Capitol Hill with Congressman Jim McGovern of Massachusetts. He is a member of the Brown Democrats, a media associate with Brown Political Review and has volunteered on campaigns, including Brown Students for Hillary and Aaron Regunberg for Lieutenant Governor of Rhode Island. During his semester in D.C., Tim hopes to learn more about student loan relief and financial support and protections for working and middle-class families. Tim interned at the Office of Senator Elizabeth Warren.

Jordanna Dulaney is a senior at Brown University concentrating in Public Policy. Previously, she interned at the U.S. Embassy in Moscow and the U.S. Embassy in Kyiv with a focus on the conflict in eastern Ukraine and evaluated Russian foreign policy planning. Jordanna has also worked as a healthcare policy researcher for a gubernatorial candidate in her home state of Minnesota. She is interested in how historical narratives influence current policies both domestically and abroad. At Brown, Jordanna is an associate editor with the Brown Journal of World Affairs, as well as a member of the East Asian Studies Department Undergraduate Group. Jordanna enjoys hiking and cross-country skiing. Jordanna interned at the Brookings Institution - Center on the United States and Europe.