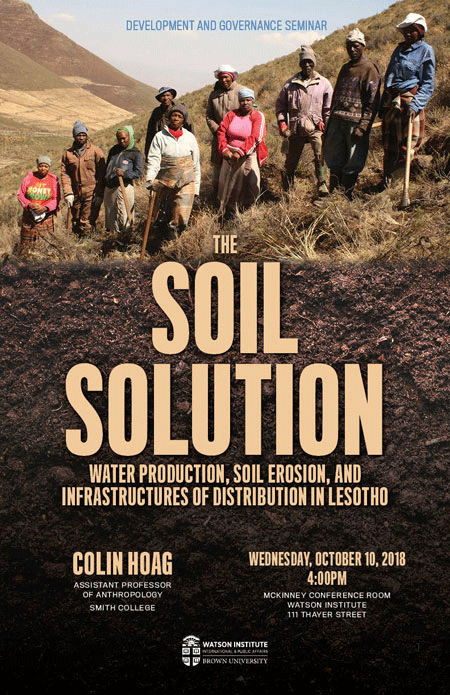 This paper examines uneasy state-citizen relations that emerge out of Southern Africa’s shifting political economies. For over a century, Lesotho operated as a labor reserve for South African gold and diamond mines, though that system collapsed in the 1990s with declining gold prices, mine mechanization, and South Africa's transition to democracy. Livestock production represents one of the few ways to earn a living in Lesotho's rural highlands today. It also happens to be a source of anxiety among national and foreign elites. Fears that livestock-induced soil erosion is causing downstream floods, reservoir sedimentation, and desertification have manifest in the production of ubiquitous but largely ineffective soil conservation structures. Such fears have amplified in light of a multi-billion dollar hydroelectric and water transport scheme undertaken with South Africa, called the Lesotho Highlands Water Project. Drawing on historical and ethnographic data collected over 15 months of fieldwork with rural farmers and civil servants in the highlands district of Mokhotlong, I suggest that the history, form, and organization of these efforts reveals how soil conservation binds together elites and peasants in a system of exploitative extraction—but also distribution. Care of the soil through performative labor has become an occasion for a refashioning of distributive economies. Fato-fato, as these conservation programs are known, have been fueled since independence by development aid and are used by politicians as patronage for their constituents. The gabions, stonelines, and silt traps that now litter the roadside landscape therefore pronounce the efficacy of the government in redistribution, while admonishing peasants for their land-use practices. Ultimately, these structures assert a particular landscape historiography—one that is used to stabilize a precarious social contract in this defunct labor reserve.

Colin Hoag is an assistant professor of anthropology at Smith College.