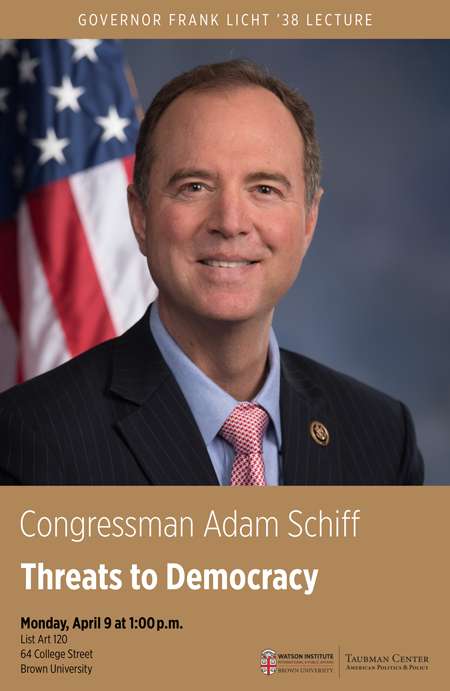 Congressman Adam Schiff will give the Taubman Center's Governor Frank Licht '38 Lecture. Congressman Schiff represents California's 28th Congressional District, and throughout his tenure in Congress, he has focused on growing the economy, bolstering national security, strengthening our communities, helping small businesses, and improving education, safety and health care for our children. In his 9th term in the House of Representatives, Schiff currently serves as the Ranking Member, or top Democrat, of the House Permanent Select Committee on Intelligence and as a Member of the Benghazi Select Committee. The House Permanent Select Committee on Intelligence oversees the nation’s intelligence agencies including components of the Departments of Defense, Homeland Security, Justice, State and Energy.

In addition to his committee work, Schiff’s top priority is to create jobs and help improve the economy. Schiff has always believed that small businesses have been the true engine of growth in challenging economic times and has been fighting to enact tax relief for small businesses, to assist them with access to capital and to remove burdensome regulations. Schiff also believes that reestablishing America as a manufacturing powerhouse is crucial. Through these efforts, American businesses can begin growing and adding jobs again so that all Americans can enjoy a brighter, more prosperous future.

Schiff has also been a leader on national security and foreign policy efforts in Congress, and has pushed for a broader strategy that emphasizes diplomacy, intelligence reform, and efforts to stabilize countries that are at risk of becoming future failed states and havens for terrorists. He has advanced efforts to ensure the safety of all Americans by addressing nuclear proliferation, and is the author of the Nuclear Forensics and Attribution Act, which President Obama signed into law on February 16, 2010. Schiff has also been a leader on human rights, and a forceful advocate for recognition of the Armenian Genocide of 1915-23, introducing resolutions and giving numerous floor speeches on the matter, including one delivered in Armenian and another addressed directly to the Turkish people. Schiff has also been an outspoken leader in the effort to end or “sunset” the 2001 Authorization to Use Military Force, which he believes no longer applies to the current struggle against ISIS and the diffuse franchises of al Qaeda scattered around the world. Schiff also co-founded the Congressional Caucus for Freedom of the Press in May 2006, a bipartisan, bicameral caucus that is chaired by Schiff. The Freedom of the Press Caucus aims to advance press freedom around the world by creating a forum to combat and condemn media censorship and the persecution of journalists around the world. Schiff is also the author of the Daniel Pearl Freedom of the Press Act, signed into law by President Obama on May 17, 2010.