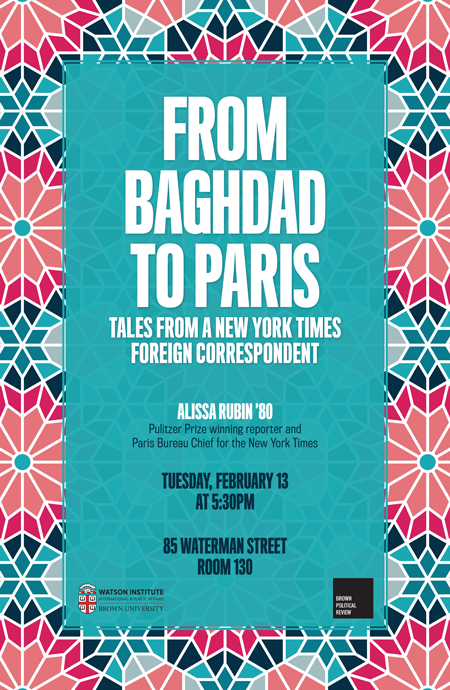 Across Europe and the Middle East, America's reputation can be a complicated mix of scorn and power. Alissa Rubin '80, Pulitzer Prize winning reporter and Paris Bureau Chief for the New York Times, will discuss the American image abroad, the impact on peace and war, and the changing role of journalism today.

Moderated by Catherine Lutz, Thomas J. Watson, Jr. Family Professor of International Studies and Professor of Anthropology, and director of the Costs of War project.

Alissa Johannsen Rubin joined The New York Times in January 2007 as a correspondent in Baghdad and covered Iraq and Afghanistan, becoming bureau chief in Baghdad in the fall of 2008, and then moving to Afghanistan in October 2009, becoming bureau chief there a couple of months later. She was in Kabul for almost four years, leaving in the late summer of 2013 to take up the job as Paris bureau chief. However, she continued to work on projects in Afghanistan and joined the team covering the Islamic State’s takeover of northern and western Iraq in 2014. That August, she was seriously injured and nearly killed in a helicopter crash in Kurdistan, covering the beleaguered Yazidis.

Before joining The Times, she was the Los Angeles Times co-bureau chief in Baghdad and its bureau chief for the Balkans for five years, a reporter for Congressional Quarterly magazine, and spent four years as a reporter in Wichita, Kan., for the Knight-Ridder newspaper then known as The Wichita Eagle-Beacon.

Ms. Rubin, was born and brought up in New York City and graduated Phi Beta Kappa in 1980 from Brown University with an honors degree in Renaissance studies and a minor in classics (Latin). She received a Mellon Fellowship in the Humanities to pursue her graduate studies in modern European history (with a focus on the history of the Catholic Church) at Columbia University, where she received an M.A. in 1986.

She is a winner of a 2016 Pulitzer Prize for international reporting; the 2015 John Chancellor Award for journalistic achievement; a 2010 Overseas Press Association award for a piece on women suicide bombers titled “How Baida Wanted to Die,” and a 1992 Washington Monthly award for a piece that appeared in the Washington City Paper, “What People Talk About When They Talk About Abortion.”