Cornel Ban ─ The Other Pentagon: Who Governs Europe and How 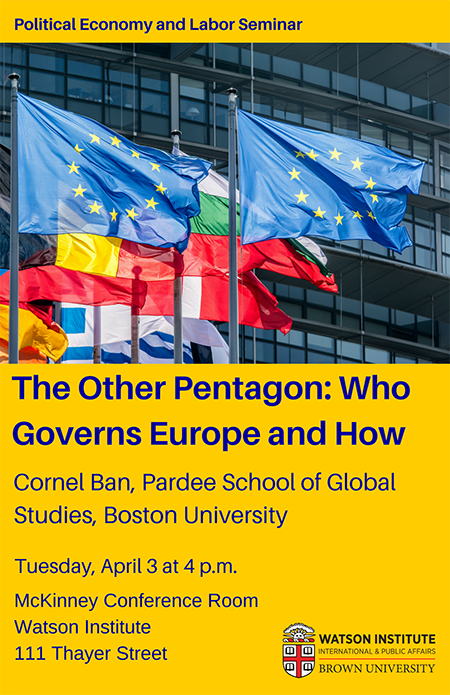 The conventional focus on the Troika as the locus of power in the European crisis management regime needs to be reconsidered. Instead, the most important vectors of political and economic power that explain the design and consequences of the austerity and structural reform packages imposted on indebted countries are to be found in overlooked relations between five main actors: the hardly visible European Stability Mechanism (ESM), the representatives of a few politically mobilized creditor countries, the German judiciary, the European Central Bank and a handful of large European bank and non-bank financial institutions. Usual suspects such as the European Commission or the European Council have been a sideshow at best. The European tragedy starts with the design of a system that made this "other Pentagon" lock in self-destructive tendencies and ward off simple solutions at the costs of democratic and economic decline.

Cornel Ban is an assistant professor at the Pardee School of Global Studies at Boston University. He is also the co-director of the Global Economic Governance Initiative at BU. He is the author of ten peer-reviewed articles on economic policy strategies in Southern Europe, Eastern Europe and Latin America, professionals and economic policy, the politics of IMF fiscal policy advice and European financial crisis management. His most recent book, Ruling Ideas: How Global Neoliberalism Goes Local, was published by Oxford University Press and deals with the local adaptation and crisis resilience of global economic paradigms in Spain and Romania. Dr. Ban also co-edited special issues on the IMF, the BRICS and shadow banking for leading journals such as Review of International Political Economy and Governance.