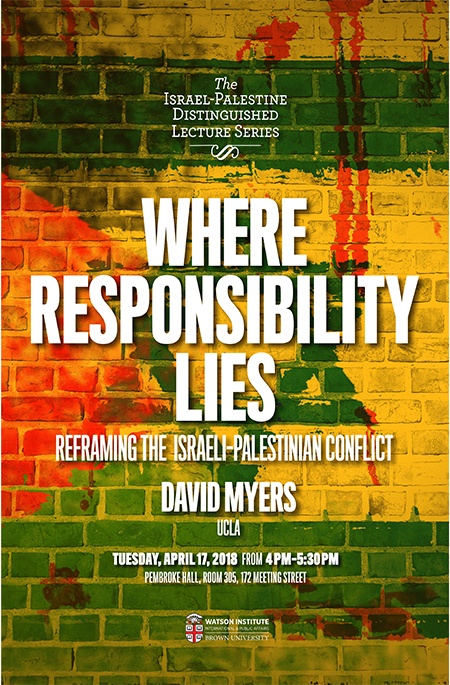 The current Israeli-Palestinian is marked by a seemingly endless cycle of mutual recrimination. Each side accuses the other of total complicity while exempting itself entirely from responsibility. In fact, both sides are partners in the conflict, with varying degrees of agency depending on time and event.

And yet, a wider angle of observation on the conflict requires us to consider the earlier European roots of the conflict. This presentation will consider a set of factors--the political aims of European powers, the persistence of antisemitism, and the promise and the failure of a meaningful minority rights regime--that set in motion the Zionist movement and the subsequent tensions between Jews and Arabs in Mandatory Palestine. The talk will conclude by reframing the web of responsibility to include but not be limited by the current Israeli and Palestinian rivals.

David N. Myers is the President and CEO of the Center for Jewish History in New York City. Myers also serves as the inaugural director of the UCLA Luskin Center for History and Policy, as well as the Sady and Ludwig Kahn Professor of Jewish History at UCLA. An alumnus of Yale College (1982), Myers undertook graduate studies at Tel-Aviv and Harvard Universities before receiving his Ph.D. with distinction in 1991 in Jewish history from Columbia University. He has written widely in the fields of Jewish intellectual and cultural history. His books include Re-inventing the Jewish Past (Oxford, 1995), Resisting History: The Crisis of Historicism in German-Jewish Thought (Princeton, 2003), Between Jew and Arab: The Lost Voice of Simon Rawidowicz (Brandeis, 2008), Jewish History: A Very Short Introduction (Oxford, 2017), and The Stakes of Jewish History: On the Use and Abuse of Jewish History for Life (Yale, 2018). Myers has also edited or co-edited eight books, most recently with Alexander Kaye The Faith of Fallen Jews: Yosef Hayim Yerushalmi and the Writing of Jewish History (Hanover, NH: University Press of New England, 2014). He is also completing a monograph, with Nomi Stolzenberg, on the Satmar Hasidic community of Kiryas Joel, New York.

Myers served from 2010-15 as the Robert N. Burr Chair of the History Department. Prior to that, he served as Vice Chair for Academic Personnel in the History Department (2002-04). For ten years, Myers served as Director of the UCLA Center for Jewish Studies (1996-2000, 2004-09, 2010-11). Myers has taught at the École des Hautes Études en Sciences Sociales (Paris) and Russian State University for the Humanities (Moscow). He has received fellowships from the Leo Baeck Institute, Fulbright Foundation, Lady David Trust, and the Memorial Foundation for Jewish Culture. Myers has been a fellow at the Katz Center for Advanced Judaic Studies at the University of Pennsylvania on three occasions (1995, 2009-10, 2016); he has also visited at the Institute for Advanced Studies in Jerusalem in 1997. Myers has served as a member of the board of the Association for Jewish Studies, as well as a teacher for the Wexner Heritage Foundation. He is also a member of the board of the New Israel Fund. He writes frequently on matters of contemporary Jewish concern. Since 2002, Myers has served as co-editor of the Jewish Quarterly Review. He is an elected Fellow of the American Academy for Jewish Research, as well as a Fellow of the Los Angeles Institute for the Humanities.