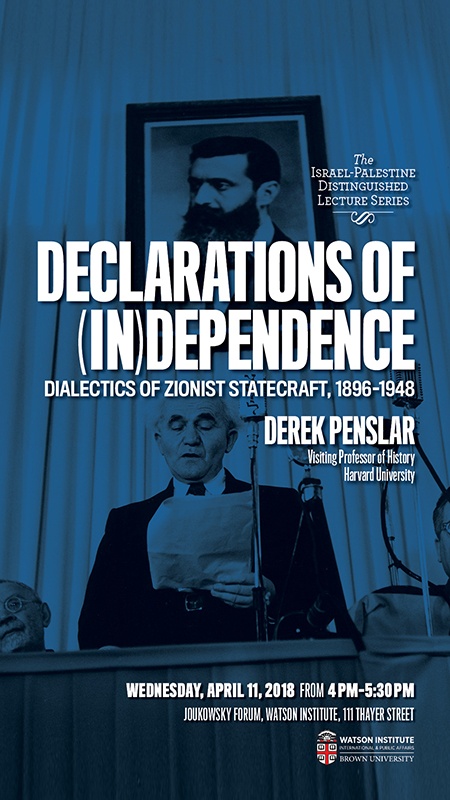 This talk analyzes the relationship between dependence and independence in four foundational texts in the history of Zionist statecraft: Theodor Herzl’s The Jewish State of 1896, the Balfour Declaration of 1917, the Biltmore Program of 1942, and the Declaration of the Establishment of the State of Israel in 1948. These documents differ greatly in authorship, structure, and audience, but, taken together, they illustrate the Zionist project's convergence with and divergence from anti-colonial projects and post-colonial states in the first half of the twentieth century.

Derek Penslar is Visiting Professor of History at Harvard, where in July he will assume the William Lee Frost Chair in Modern Jewish History. Penslar approaches modern Jewish history from a transnational and global perspective. His work encompasses the history of the Jews in modern West and Central Europe, North America, and Palestine/Israel. He is particularly interested in the relationship between modern Israel and diaspora Jewish societies, global nationalist movements, European colonialism, and post-colonial states.

Penslar has taught at Indiana University, Bloomington, the University of Toronto, and Oxford University, where he served as the inaugural Stanley Lewis Professor of Modern Israel Studies from 2012 until 2016. He co-edits The Journal of Israeli History and serves on the editorial boards of The Journal of Jewish Studies, Jewish Social Studies, Israel Studies, and the Association of Jewish Studies Review. He is a Fellow of the Royal Society of Canada and of the American Academy for Jewish Research.

Penslar's books include Zionism and Technocracy: The Engineering of Jewish Settlement in Palestine, 1870-1918 (1991); In Search of Jewish Community: Jewish Identities in Germany and Austria, 1918-1933 (1998, co-edited with Michael Brenner), Shylock’s Children: Economics and Jewish Identity in Modern Europe (2001); Orientalism and the Jews (co-edited with Ivan Kalmar, 2004), Israel in History: The Jewish State in Comparative Perspective (2006); The Origins of the State of Israel 1882-1948: A Documentary History (with Eran Kaplan, 2011). and Jews and the Military: A History (2013).