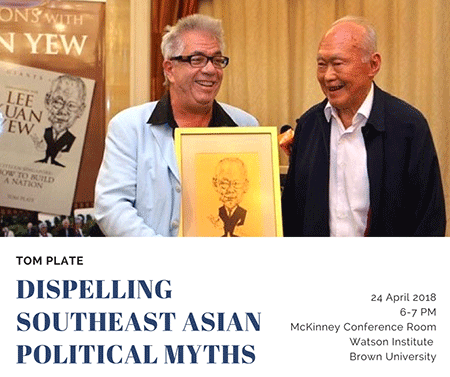 Join the Southeast Asian Studies Initiative and Brown University Merlions for a skype conversation with Tom Plate, Editor of the Editorial Pages of the Los Angeles Times from 1989 to 1995 and former L.A. Times op-ed columnist. He is the author of incisive political perspectives on Southeast Asia such as "Conversations With Lee Kuan Yew: Citizen Singapore – How to Build a Nation" and "Confessions of an American Media Man: What They Don't Tell You at Journalism School".

He has been featured in South China Morning Post in Hong Kong, where he is now a columnist writing fortnightly about China, while based in Los Angeles,The Straits Times in Singapore, The Khaleej Times out of Dubai, United Arab Emirates, The Japan Times in Tokyo, The Korea Times in South Korea, The Jakarta Post and many others.