Fatma Müge Göçek – Gender and Nationalism in Turkey and Kurdistan 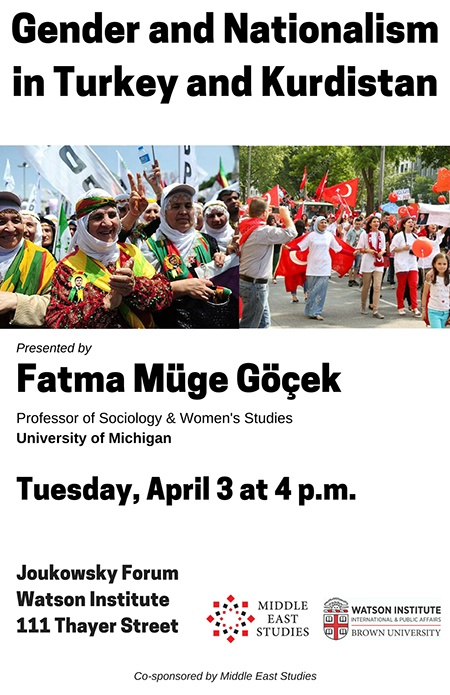 Listen to Podcast with conference participants

This talk explores the intersection of gender and nationalism from the vantage point of boundary formation. After briefly discussing the analytical rigor of such an approach, it turns to its empirical application in the case of modern Turkey (founded 1923). It focuses specifically on how Turkish and Kurdish men and women align and interact in relation to their national visions and practices.

Fatma Müge Göçek is a Professor of Sociology and Women's Studies at the University of Michigan. Her research focuses on the comparative analysis of history, politics and gender in the first and third worlds. She critically analyzes the impact of processes such as development, nationalism, religious movements and collective violence on minorities. Her published works includes East Encounters West: France and the Ottoman Empire in the 18th Century (Oxford University Press, 1987), Reconstructing Gender in the Middle East: Tradition, Identity, Power (Columbia University Press, 1994 co-edited with Shiva Balaghi), Rise of the Bourgeoisie, Demise of Empire: Ottoman Westernization and Social Change (Oxford University Press, 1996), Political Cartoons in the Middle East (Markus Wiener Publishers, 1998), Social Constructions of Nationalism in the Middle East (SUNY Press, 2002), The Transformation of Turkey: Redefining State and Society from the Ottoman Empire to the Modern Era (I.B. Tauris Publishers, 2011), and A Question of Genocide: Armenians and Turks at the End of the Ottoman Empire (Oxford University Press, 2011 co-edited with Ronald Grigor Suny and Norman Naimark).