The Global Uprising Against Poverty Wages: An Urgent History of Now 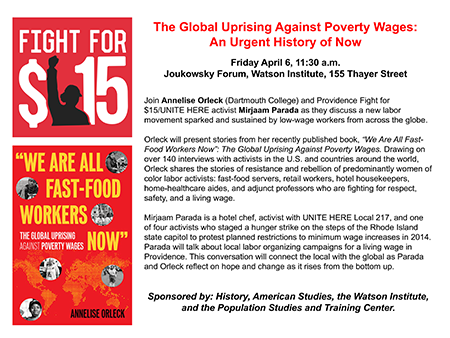 Join Annelise Orleck (Dartmouth College) and Providence Fight for $15/UNITE HERE activist Mirjaam Parada as they discuss a new labor movement sparked and sustained by low-wage workers from across the globe.

Orleck will present stories from her recently published book, “We Are All Fast-Food Workers Now”: The Global Uprising Against Poverty Wages. Drawing on over 140 interviews with activists in the U.S. and countries around the world, Orleck shares the stories of resistance and rebellion of predominantly women of color labor activists: fast-food servers, retail workers, hotel housekeepers, home-healthcare aides, and adjunct professors who are fighting for respect, safety, and a living wage.

Mirjaam Parada is a hotel chef, activist with UNITE HERE Local 217, and one of four activists who staged a hunger strike on the steps of the Rhode Island state capitol to protest planned restrictions to minimum wage increases in 2014. Parada will talk about local labor organizing campaigns for a living wage in Providence. This conversation will connect the local with the global as Parada and Orleck reflect on hope and change as it rises from the bottom up.

Co-sponsored by the History Department, American Studies, the Watson Institute, and the Population Studies and Training Center