How Inequality Harms the Wealthy 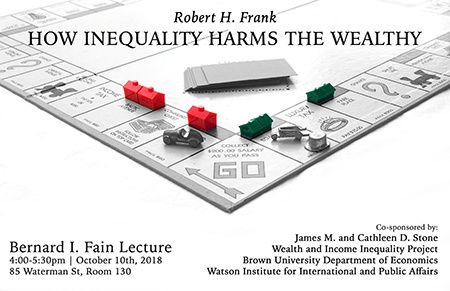 Robert H. Frank is the Henrietta Johnson Louis Professor of Management and a Professor of Economics at the Samuel Curtis Johnson Graduate School of Management at Cornell University. He contributes to the "Economic View" column, which appears every fifth Sunday in The New York Times.

He received his BS in mathematics from Georgia Tech, and then taught math and science for two years as a Peace Corps Volunteer in rural Nepal. He holds an MA in statistics and a PhD in economics, both from the University of California at Berkeley. His papers have appeared in the American Economic Review, Econometrica, Journal of Political Economy, and other leading professional journals.

Co-sponsored by James M. and Cathleen D. Stone Wealth and Income Inequality Project, Department of Economics, and the Watson Institute