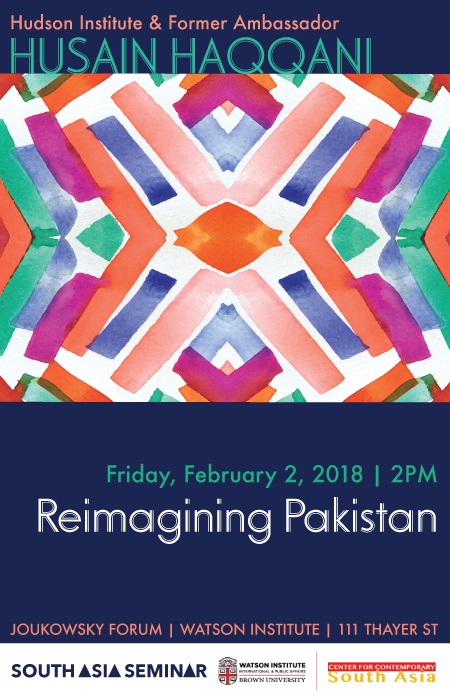 Husain Haqqani is a Pakistani scholar and public figure who most recently served as Pakistan’s ambassador to the United States from 2008-2011. He is widely credited with managing a difficult partnership during a critical phase in the global war on terrorism.

Ambassador Haqqani’s latest book Magnificent Delusions: US, Pakistan and the Global Jihad which came out in November 2013 has been described as “timely, valuable and objective” by former Secretary of State Madeleine Albright. Haqqani’s 2005 book Pakistan Between Mosque and Military was acclaimed for explaining the roots of Pakistan’s foreign and domestic policies.

Haqqani started his public life as an Islamist student leader and has, over the years, emerged as a strong voice for democracy and civilian control of the military in Pakistan and an exponent of liberal values in the Muslim world. His distinguished career in government includes serving as an advisor to three Pakistani Prime ministers, including Benazir Bhutto, who described him as a loyal friend in her last book ‘Reconciliation.’ He also served as Pakistan’s Ambassador to Sri Lanka in 1992-93.

Ambassador Haqqani is currently Senior Fellow and Director for South and Central Asia at the Hudson Institute. Haqqani also co-edits the journal ‘Current Trends in Islamist Ideology’ published by Hudson Institute’s Center for Islam, Democracy and Future of the Muslim World.