An Inside Look at Election Coverage 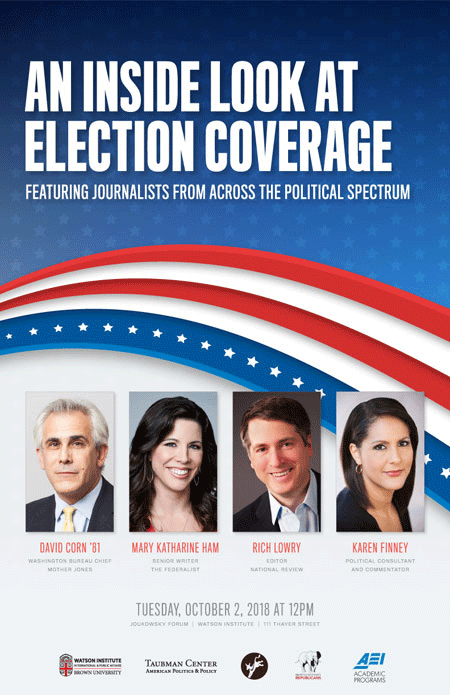 Mary Katharine Ham is a CNN Political Commentator who co-moderated a 2016 GOP primary debate on ABC. She's the co-author of "End of Discussion: How the Left's Outrage Industry Shuts Down Debate, Manipulates Voters, and Makes America Less Free (and Fun)." A graduate of the University of Georgia, and fourth-generation journalist, she did a stint covering NASCAR and high-school football before embracing New Media and heading to Washington D.C. to cover national politics. A mom of two girls, she hiked Kilimanjaro on her honeymoon and is always looking for new challenges, hiking and running races all over the U.S. whenever possible, often with the kids in tow. In 2017, Ham taught on free-speech issues as a Harvard Institute of Politics Visiting Fellow in the Kennedy School of Government. She is also on the board of the Travis Manion Foundation, a veteran service and public service organization.

As  one of  the most  respected conservative voices, Rich Lowry brings his sharp analysis and well-­formed opinions to the political discussion through his writing and commentary. Lowry became editor of National Review in 1999 when selected by William F. Buckley, Jr. to lead the magazine. Today, National Review remains a conservative guidepost, helping to bring to prominence rising conservative leaders and advance conservative policies. Lowry is a syndicated columnist and a political commentator with CNN. His insight and analysis can also be found in Politico where he writes a weekly column. Known for his skillful debating style, Lowry is a frequent guest on Meet the Press  and This Week with George Stephanopoulos. He is the author of Lincoln Unbound, which follows Abraham Lincoln’s climb to the presidency and distills lessons from his ethic of relentless striving. Lowry’s book on Bill Clinton – Legacy: Paying the Price for the Clinton Years – was a New York Times bestseller.