Meeting the Climate-Change Challenge: What Do We Know? What Should We Do? 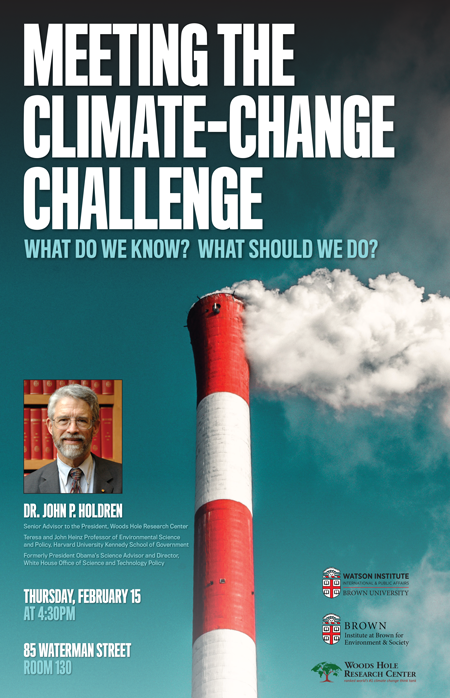 Dr. Holdren, who served as President Obama’s Science Advisor and the Director of the White Office of Science and Technology Policy through both Obama terms, was responsible for interpreting, for the President, the state of climate-change science and its implications for policy. The analyses he provided played a major role in shaping the Administration’s climate-change policy, including the President’s June 2013 Climate Action Plan and the U.S. stance in the December 2015 negotiation of the Paris accord. In this talk, he will update his assessment of what the science is telling us about the urgency of increased ambition in addressing the climate-change challenge and will reflect on the gulf between Obama’s stance on this issue and Trump’s.

Dr. Holdren was President Obama’s Chief Science and Technology Advisor and the Senate-confirmed Director of the White House Office of Science and Technology Policy (OSTP) from 2009 to 2017, becoming the longest-serving Science Advisor to the President in the history of the position (dating back to World War II). His responsibilities in this capacity included advising the President on all science and technology issues bearing on the President’s agenda (including economic growth and job creation, biomedicine and public health, energy and climate change, the oceans and the Arctic, the Nation’s space program, and national and homeland security); coordinating R&D strategy and budgets across all the Executive Branch departments and agencies; overseeing interagency S&T programs such as the U.S. Global Change Research Program and the National Nanotechnology Initiative; developing initiatives in STEM education and training; advancing scientific integrity and openness in government; and representing the U.S. government in interactions with the U.S. and global science and engineering communities.

Prior to joining the Obama administration, Dr. Holdren was the CEO of the Woods Hole Research Center (WHRC), in addition to several other distinguished posts in science and academia. He rejoined WHRC in 2017 as a Senior Advisor to the President – a voluntary role providing strategic guidance, and helping WHRC to remain at the forefront of climate research and policy. He is also a professor at the Harvard Kennedy School and the Belfer Center for Science and International Affairs.

Dr. Holdren earned his B.S. from the Massachusetts Institute of Technology and his M.S. and Ph.D from Stanford University in aerospace engineering and theoretical plasma physics.

Co-sponsored by the Woods Hole Research Center, the Institute at Brown for Environment and Society and the Watson Institute.