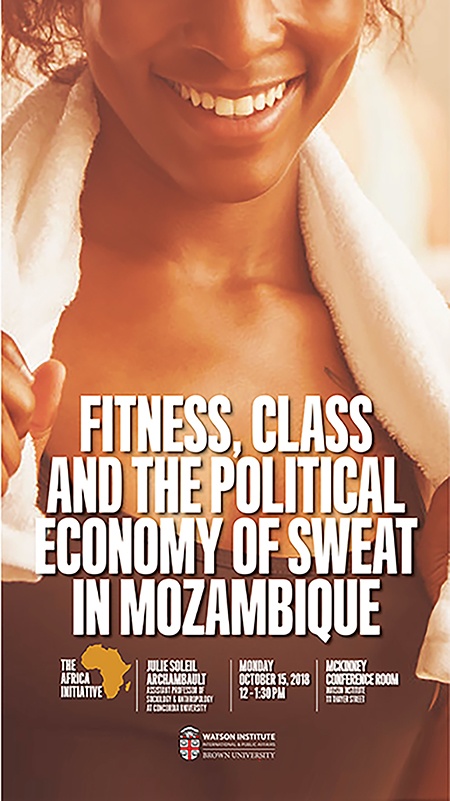 We have never been fatter. Even sub-Saharan Africa, a continent better known for its famines and chronic malnutrition, is now facing a growing obesity epidemic. But we have also never been fitter. The global “obesity crisis” has, in fact, coincided with a “fitness revolution”. How do these two seemingly contradictory phenomena, which have only recently started spreading across sub-Saharan Africa, intersect with the rise of the middle class? The paper examines this question in Mozambique, an unlikely place for a fitness revolution, yet one where exercising is now all the rage, especially in urban areas. On the one hand, fatness in Mozambique is seen by many not only as aesthetically and sensuously pleasing but also as a marker of entangled ideals of health, wealth and connectedness. On the other, in a place where sweat is closely tied to exploitation, people generally try to outsource sweat-inducing activities as best they can. Based on ethnographic research I carried out in the city of Inhambane, southern Mozambique, the paper reflects on how globally circulating ideas about wellness and self-improvement are received and appropriated in an African context. If wealth and status have commonly translated into particular kinds of bodies—bodies that can accumulate fat and bodies that can avoid sweating— the globalization of obesity and of fitness are provoking a redefinition of the relationship between social class and bodily substances. What my ethnography also reveals is that sweat is not as symbolically vacuous, not as a-social, and certainly not as innocuous as its overall omission in the literature seems to suggest. Indeed, although there is a wide literature on bodily substances, from classic symbolic analyses to more recent “new kinship studies”, to studies on infrastructure and the politics of sanitation, sweat has received surprisingly scant attention.

Julie Soleil Archambault is Assistant Professor of Anthropology at Concordia University. She received her PhD in anthropology from the School of Oriental and African Studies (2010) and is the author of Mobile Secrets: youth, intimacy and the politics of pretense in Mozambique (University of Chicago Press, 2017).