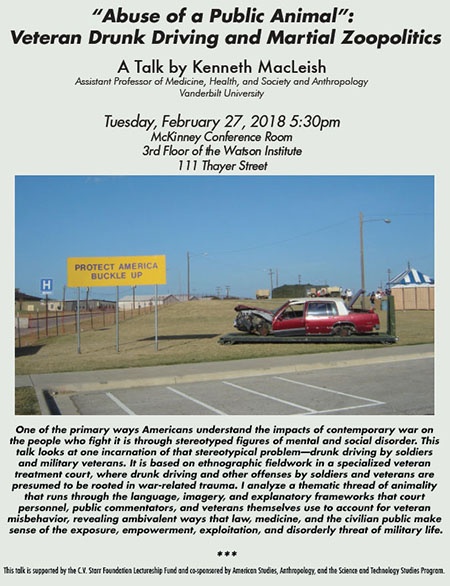 This talk is part of a lecture series on "Logics of War: Critical Perspectives on Warfare and Modern American Culture," supported by the C. V. Starr Foundation Lectureship and the Department of American Studies.

One of the primary ways Americans understand the impacts of contemporary war on the people who fight it is through stereotyped figures of mental and social disorder. This talk looks at one specific incarnation of that stereotypical problem—drunk driving by soldiers and military veterans. It is based on ethnographic fieldwork in a veteran treatment court, a specialized court that works with military and veteran offenders whose crimes of drunk driving, drug use, and assault are presumed to be rooted in war-related trauma. As in many other therapeutic, judicial, and institutional settings, veteran offenders are understood to be in the throes of forces beyond their control, even as they are made individually responsible for their misdeeds. This talk examines a thematic thread of animality that runs through the language, imagery, and explanatory frameworks that court personnel, public commentators, and veterans themselves use to account for veteran misbehavior. These range from humiliating or abject accounts of veteran bad behavior to the psychophysiological mechanism—so-called “fight or flight”—by which posttraumatic is conventionally understood to operate. Highly trained service and working dogs are celebrated as the virtuous counterparts of humans living through and after war, but other animal figures explored in this talk reveal the more ambivalent ways that law and medicine and the civilian public make sense of the exposure, empowerment, exploitation, and disorderly threat of military life.

Kenneth MacLeish is Assistant Professor of Medicine, Health, and Society and Anthropology at Vanderbilt University.  He studies how war, broadly considered, takes shape in the everyday lives of people whose job it is to produce it -- U.S. military service members and their families and communities.  His book, Making War: Everyday Life at Fort Hood (Princeton University Press, 2013) is based on 12 months of ethnographic fieldwork at and around the U.S. Army's Fort Hood in central Texas.  It shows how the challenges of military life originate as much from the relentless demands of the Army itself as from the violence of enemies in combat, creating a distinctive condition of vulnerability in which violence is as routine, boring, and normal as it is shocking and disruptive.  His current research examines the bodily and psychic impacts of war, as well as military mental and behavioral health programs.

Co-sponsored by Anthropology and the Science and Technology Studies Program