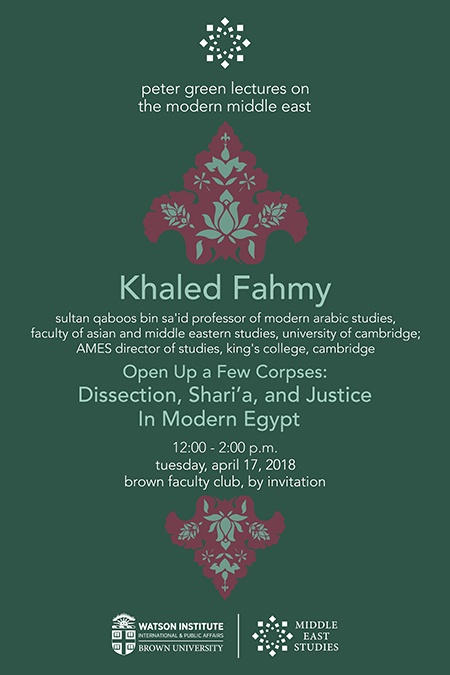 Khaled Fahmy is the Sultan Qaboos bin Sa'id Professor of Modern Arabic Studies, Faculty of Asian and Middle Eastern Studies at the University of Cambridge and the AMES Director of Studies at King's College in Cambridge.

This lecture describes the process of the introduction of modern medicine in early nineteenth-century Egypt. It describes how dissection was instituted as a central practice in the Qasr al-'Aini School of Medicine, Egypt's first institution of modern medicine founded in 1827. It charts how different segments of Egyptian society understood and reacted to this disturbing practice. It also follows the increasing reliance of a budding legal system on autopsies as a prime means to establish legal proof in criminal cases. As such, the lecture suggests how forensic medicine can be a lens through which a Muslim society's encounter with modern science can be understood.

Khaled Fahmy is a historian of the modern Middle East, with a specialty in the social and cultural history of nineteenth-century Egypt. Born and raised in Egypt, Fahmy studied economics for his BA, and then political science for his MA, both degrees he received from the American University in Cairo (AUC). He then went to the University of Oxford where he wrote his DPhil dissertation on the history of the Egyptian army during the first half of the nineteenth century. After receiving his doctorate in 1993, Fahmy moved to the US where he worked first at Princeton University then at New York University. After seventeen years in the US, he returned to his home country in 2010, and joined his alma mater, AUC, as chair of the Department of History. In 2013, Fahmy returned to the US, this time as a visiting fellow at Columbia University, then as a visiting professor at Harvard University. He joined the University of Cambridge in 2017. Forthcoming publication, “In Quest of Justice: Islamic law and Forensic Medicine in Modern Egypt,” due fall 2018 from University of California Press.