Kostis Karpozilos ─ The Macedonian Question: The Trap of History and the Recent Greece-FYROM Agreement 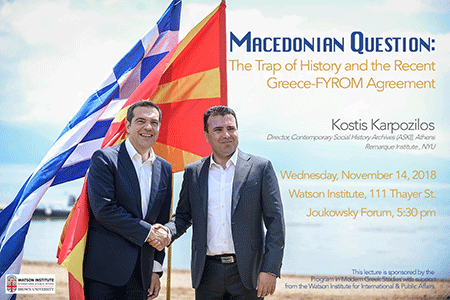 On June 17 the Greek Prime Minister Alexis Tsipras and his Macedonian counterpart Zoran Zaev signed an agreement resolving a long-standing dispute between Greece and the Former Yugoslav Republic of Macedonia regarding the latter’s name. From the early 1990s Greece had questioned the right of Macedonians to self-determination leading to a complicated diplomatic dispute that fuelled nationalism on both sides of the borders. This talk aims to disentangle the trajectory of this complicated issue and argues that perceptions of ancient and modern history were seminal in entrapping Greek society in a state of denial. At the end of the day, why can’t one ask for a “Macedonian salad” in Greek Macedonia?

Kostis Karpozilos is currently a visiting scholar at the Remarque Institute at NYU. He is the director of the Contemporary Social History Archives (ASKI) in Athens and co-author (with Dimitris Christopoulos) of the best-selling book 10+1 questions and answers on the Macedonian Issue (in Greek, Polis, 2018). He is the scriptwriter of the documentary Greek-American Radicals: the Untold Story (2013), the author of a book on the Cretan socialist intellectual Stavros Kallergis (Benaki Museum, 2013), and of Red America: Greek Iimmigrants and the Quest for a New World, 1900-1950 (Crete University Press, 2017). Kostis is teaching at the Hellenic Open Univeristy and at CYA (College Year in Athens) and he is currently working on a manuscript on the transnational history of the Greek Left.

Presented by the Department of Modern Greek Studies and cosponsored by the Watson Institute.