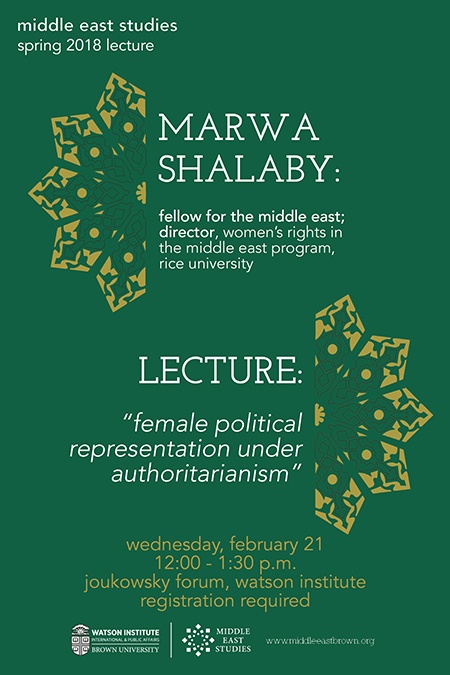 The Arab world has one of the lowest rates of women’s political representation at 17 percent, compared to 40 percent in Nordic countries and 27 percent in both Europe and the Americas. Whereas previous explanations for women’s political underrepresentation in the region has mostly focused on socio-economic and cultural factors, our understanding of the effect of the existing autocratic structures on women’s access to political power continues to be fairly limited. Little or no scholarly attention was paid to the impact of the politics of authoritarianism on shaping not only women’s numerical presence in national legislatures (i.e., descriptive representation), but also, their legislative behavior and policy priorities once in office (i.e., substantive representation). The talk will shed light on some of these aspects while explicating the dynamics of women’s membership in legislative committees across the MENA region.

Marwa M. Shalaby is the Fellow for the Middle East and Director of Women’s Rights in the Middle East Program, Rice University, Texas. Her research is in the field of comparative politics and research methodology, with a concentration on Middle Eastern politics, gender politics and democratization. Her ongoing research investigates the dynamics of female political representation in the MENA region. She is the PI for the Governance and Elections in the Middle East Project (GEMEP) and she has published extensively on the topic. Her research is supported by the Women's Rights in the Middle East Endowment, the Boniuk Institute, the Issam Fares Institute for Public Policy (American University of Beirut) and the Carnegie Corporation of New York. Her book, The Evolving Role of Women after the Arab Spring, is co-edited with Valentine Moghadam and published with Palgrave Macmillan. Currently, she is working on a book manuscript investigating the impact of authoritarianism on shaping women’s access to political power in the Arab world.