The Music of Syria: A Concert by Contemporary Syrian Composers and Performers with Ashraf Kateb & Hamsa Al-Wadi Juris 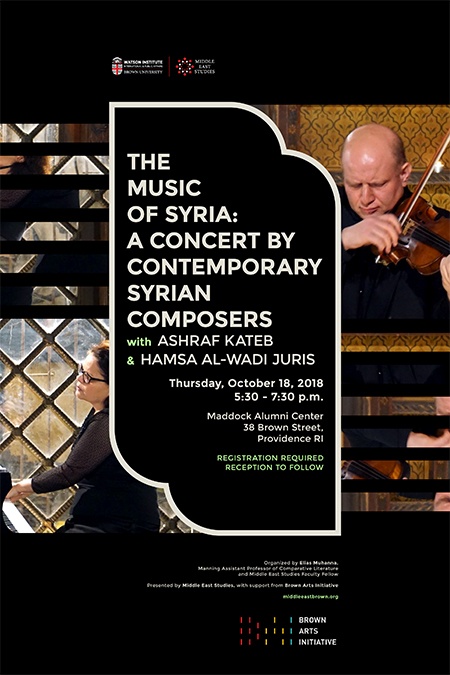 Registration for this event is at capacity. Unclaimed seats will be released to those on stand-by at the start of the event.

“Syria in my Heart: Classical Music by Contemporary Syrian Composers.”

Note: All the works by Syrian composers are U.S. premieres.

Ashraf Kateb is a Syrian-German violinist and composer devoted to preserving the Arabic classical music heritage. Born in Aleppo, Syria, he studied violin at music academies in Aleppo, Moscow, Berlin, and Krakow. He has lived in Berlin since 1992. He produced his first CD, titled Gesture, in 2001. The project presented the violin and piano works of seven Arab composers from Syria, Lebanon, Egypt and Morocco. His recordings also include the 2010 album Dia Succari, Composer from my Aleppo, featuring the complete works (22 pieces) for violin and piano of Syrian composer Dia Succari accompanied by 22 pianists from 21 different nations. In October 2009, Ashraf was awarded the Silver Shield of the City of Aleppo, presented by the Mayor and Chairman of the City Council, in recognition of his efforts to promote musical culture.

Hamsa Al-Wadi Juris, born in Baghdad, grew up in Damascus, where she began her musical education at the Damascus Conservatory of Music founded by her father, Solhi Al-Wadi (1934-2007), the doyen of classical music in Syria. There she started piano lessons with her mother, Cynthia Everett Al-Wadi (1934-2009), a graduate of London’s Royal Academy of Music, and continued with Russian teachers, especially with Professor Vladimir Bunin.

In 1982 Hamsa graduated with honors from the Moscow Tchaikovsky Conservatory, where in 1985 she completed post-graduate studies. Her teacher was Professor Pavel Messner (1931-2005), former assistant to famous Russian pianist Emil Gilels. At the 1981 International Beethoven Piano Competition in Vienna she won fourth prize.

Concert appearances have taken Hamsa Al-Wadi Juris to the Baltic countries, Ecuador, France, Germany, Great Britain, Iceland, Russia, Scandinavia, the USA, and also to the Near East and Gulf States. She often performs in piano duos with her husband, Ecuadoran pianist Carlos Juris.

Since 1985, Hamsa has resided with her family in Finland where she has a teaching position in the piano faculty of the University of the Arts Sibelius Academy of Helsinki. Among her students are laureates of national and international competitions. She also works as a juror in piano competitions in Finland and abroad.

Boghos Gelalian (1927-2011), an Armenian-Syrian composer who lived in Lebanon, was nicknamed “Batrak” (Patriarch) for his knowledge of and devotion to music. Gelalian’s compositions are largely devoted to piano and chamber music. Alongside his compositions for piano (Sonatine, Sonata per Pianoforte, Tre Cicli, Canzona Toccata, transcription of Chaconne by Bach, and the Choral “Jesus, may my joy remain”), there are also musical pieces for violin, cello, a toccata for organ, two vocalises for soprano, an Elegy for cello, and “Poem” and “Perpetual Motion” for violin. Also remarkable are four variations for solo English horn, four games for solo flute, and especially the seven sequences for orchestra (Editions Peters, Leipzig). Gelalian was also often solicited to participate in the Baalbek International Festivals, to harmonize and orchestrate music such as songs and dabke music, a task he undertook with great sincerity and attention to detail.

Walid Al-Hajjar (b. 1932), was born in Damascus and studied architecture at the American University of Istanbul. Later he studied in Paris at the Haute Ecole de la Musique and at the Institut des Beaux Arts. In 1957 he obtained an M.A. in political science from the US He has lived between Beirut, Damascus, Rome, Paris and Spain, excelling as a novelist, a painter, and a researcher as well as a musician. His work “Danse crépusculaire” has a romantic character, distinguished by a sophisticated technique for the violin. He dedicated this piece to Syrian violinist Nejmi Succari.

Zaid Jabri (b. 1975), was born in Damascus and received his doctor of arts in composition at Akademia Muzyczna in Krakow, Poland. He works at the intersection of Western and Middle Eastern musical traditions, focusing on the dense histories of migration within which harmonic and instrumental strategies have been shared, reworked, claimed, and disavowed in the long engagement between Eastern and Western Europe and the Arabic and Persian speaking worlds. He has been a fellow at the MacDowell Colony, a resident at the Rockefeller Foundation Bellagio Center, a Weiss International Fellow in Literature and the Arts at Barnard College, and a fellow of the Radcliffe Institute at Harvard.

Dia Succari (1938-2010), was born in Aleppo, Syria. The first melodious notes that he recalled hearing as a child were the calls for prayer by the muezzins in Bab El-Nasr quarter. His passion for European music came from his father, who sent him and his brother Nejmi to learn the violin under Professor Michail Borisenko in Aleppo. In 1951, both Succaris enrolled at the Conservatoire National Supérieur de Musique in Paris, where Dia studied music composition under Professors Tony Aubin and Olivier Messiaen. He studied harmony under Professor Henri Cahallan, and orchestra leadership under Professors Manuel Rosenthal and Robert Blot. In Paris, while composing, directing orchestras, teaching at the conservatories and authoring books on music (solfège, harmony, etc.), Succari became increasingly interested in the traditional and popular music of his home country, the musical Maqams, and Syrian mythology. His musical compositions are various and versatile: instrumental, lyrical, solo, chamber, and orchestral.

Solhi Al-Wadi (1934-2007), was a composer and conductor, considered to have created Syria’s system of higher music education and to have put the country on the classical music map. Born in Baghdad, he moved to Syria with his parents as a child. After attending Victoria College in Alexandria, Egypt, he studied at the Royal Academy of Music in London. Returning to Syria in 1960, he founded and directed the Arab Institute of Music (renamed the Solhi al-Wadi Institute of Music in 2004), and was a central figure in founding the Higher Institute of Music and Theater and the Syrian National Symphony Orchestra, which gave its first concert under his baton in 1991.