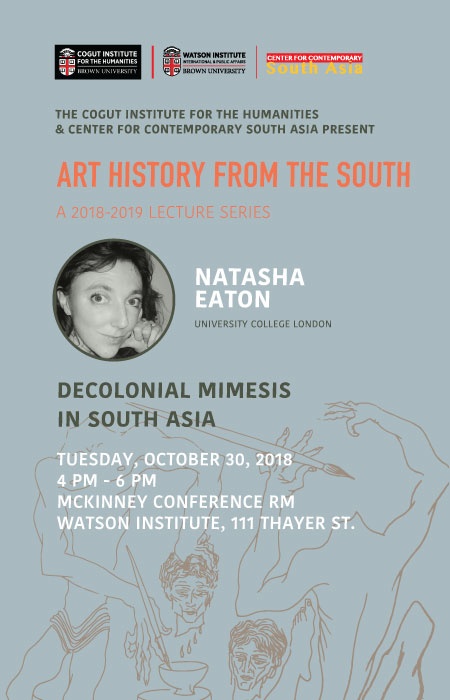 Natasha Eaton is Reader in the History of Art. Her research focuses primarily on British and Indian art, notions of cross cultural exchange and material culture. Currently she is at work on several projects – art and indenture in the Indian Ocean; collecting and empire; the agency of light in empire. She has published two monographs – Mimesis across Empires: Artworks and Networks in India, 1765-1860 (Duke University Press, 2013) and Colour, Art and Empire: Visual culture and the nomadism of representation (I.B.Tauris, 2013). She is under contract from Routledge to write a monograph on colonialism, tourism and collecting provisionally titled Vertiginous Exchange. Natasha has published in many peer-reviewed journals including The Art Bulletin, RES, Journal of Material Culture, Oxford Art Journal, Eighteenth-Century Studies, Cultural Critique, Comparative Studies in Society and History, Journal of Historical Geography, MARG, Literature Compass and Third Text. She has been an advisor to and is currently is an editor of the journal Third Text. With Alice Correia she is preparing a special issue of Third Text on Partitions in South Asia scheduled for Autumn 2017. She is also the editor of A Cultural History of Color in the Age of Industry (ed.) Natasha Eaton. Volume 6 (eds.) Carole C. Biggam and Kirsten Wolf (general editors) as part of A Cultural History of Color (Bloomsbury: London and New York).

Natasha’s research and publications have been generously sponsored by The Leverhulme Trust, the British Academy, Yale University and the Society for Eighteenth-century Studies, Historians of British Art Association, the Paul Mellon Centre, the University of Michigan and the Freer Gallery, the Simon Fellowship at the University of Manchester, the Nehru-V&A Trust, the Getty, the AHRC and UCL. She has organised symposia at the Paul Mellon Centre and Columbia University. Natasha welcomes undergraduate and graduate students with an interest in British art and South Asian visual culture, colour, mimesis, the postcolony and materiality.

This lecture is part of the Art History From the South Series, which aligns with the Cogut Institute Collaborative Humanities graduate seminar of the same title (HMAN 2400H: Art History from the South: Circulations, Simulations, Transfigurations), as well as the Cogut Institute Collaborative Humanities international symposium entitled How Secular is Art? to be held on October 26-27, 2018. Read more about the series here.

Co-sponsored by the Cogut Institute for Humanities