The New Barbarianism - Screening and Discussion 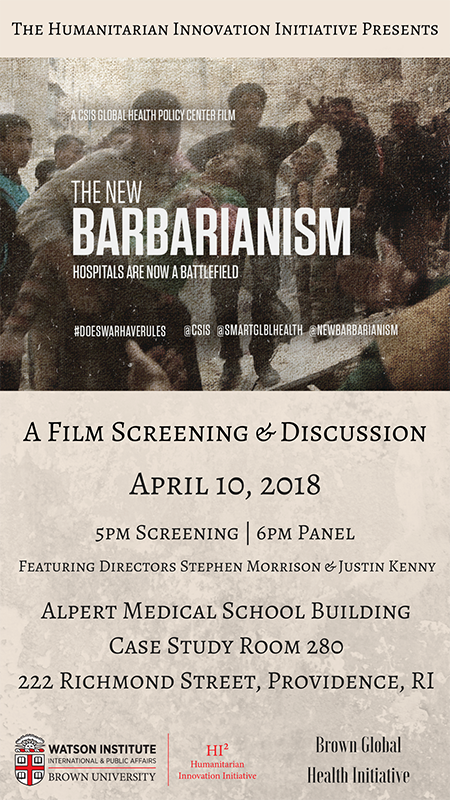 The Humanitarian Innovation Initiative in collaboration with the Brown Global Health Initiative invites you to join us for a special film screening of The New Barbarianism followed by a panel discussion with the film's executive producer and director Stephen Morrison, co-director and writer Justin Kenny, and Disaster Medicine and Emergency Preparedness Fellow at Brown, Rashmi Sharma.

Healthcare and humanitarian workers are increasingly in the crosshairs as hospitals and aid centers have become part of the battlefield in today’s wars. So far, there has been little to stop the profound surge of violence seen across several open-ended conflicts which has claimed thousands of lives, destroyed health systems, triggered mass displacement and state collapse, and exposed the crisis facing the norms of international humanitarian law contained in the Geneva Conventions.

The New Barbarianism is a CSIS Global Health Policy Center original feature documentary (58 minutes) that examines the crisis, its causes, the limited international response and possible ways forward through dozens of interviews and original footage obtained from inside Syria, Yemen and Afghanistan. It builds on several years of prior GHPC work on the intersection of health and security, the role of militaries, and the human tragedies seen in Syria and Yemen.