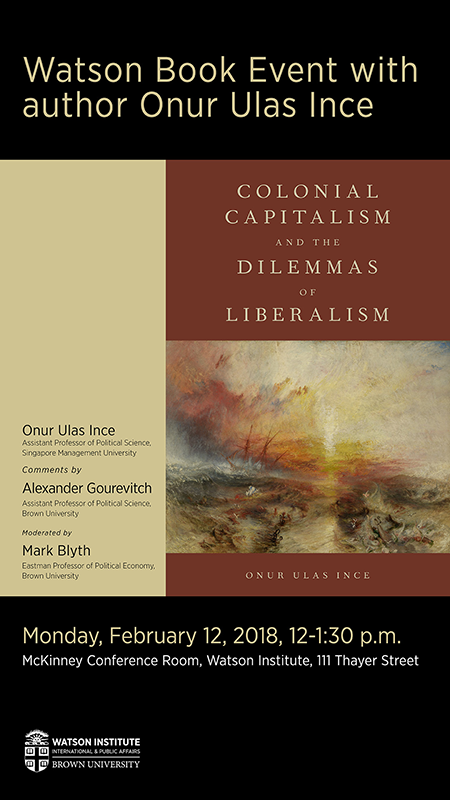 Join author Onur Ulas Ince for a discussion of his new book, Colonial Capitalism and the Dilemmas of Liberalism.

By the mid-nineteenth century, Britain celebrated its possession of a unique “empire of liberty” that propagated the rule of private property, free trade, and free labor across the globe. The British also knew that their empire had been built by conquering overseas territories, trading slaves, and extorting tribute from other societies. Set in the context of the early-modern British Empire, Colonial Capitalism and the Dilemmas of Liberalism paints a striking picture of these tensions between the illiberal origins of capitalism and its liberal imaginations in metropolitan thought.

Onur Ulas Ince combines an analysis of political economy and political theory to examine the impact of colonial economic relations on the development of liberal thought in Britain. He shows how a liberal self-image for the British Empire was constructed in the face of the systematic expropriation, exploitation, and servitude that built its transoceanic capitalist economy. The resilience of Britain’s self-image was due in large part to the liberal intellectuals of empire, such as John Locke, Edmund Burke, and Edward Gibbon Wakefield, and their efforts to disavow the violent transformations that propelled British colonial capitalism. Ince forcefully demonstrates that liberalism as a language of politics was elaborated in and through the political economic debates around the contested meanings of private property, market exchange, and free labor.

Weaving together intellectual history, critical theory, and colonial studies, this book is a bold attempt to reconceptualize the historical relationship between capitalism, liberalism, and empire in a way that continues to resonate with our present moment.

Onur Ulas Ince is an assistant professor of political science at Singapore Management University and a political theorist with research interests in the history of political thought, political economy, history of capitalism, and imperial studies. He mainly investigates how socioeconomic transformations constitutive of global capitalism have shaped and in turn have been shaped by various discourses of political economy since the early-modern period. His research has been published in The Journal of Politics, History of Political Thought, New Political Economy, The Review of Politics, Polity, and Rural Sociology. He received his PhD in Government from Cornell University.