Quinn Slobodian – Globalists: The End of Empire and the Birth of Neoliberalism 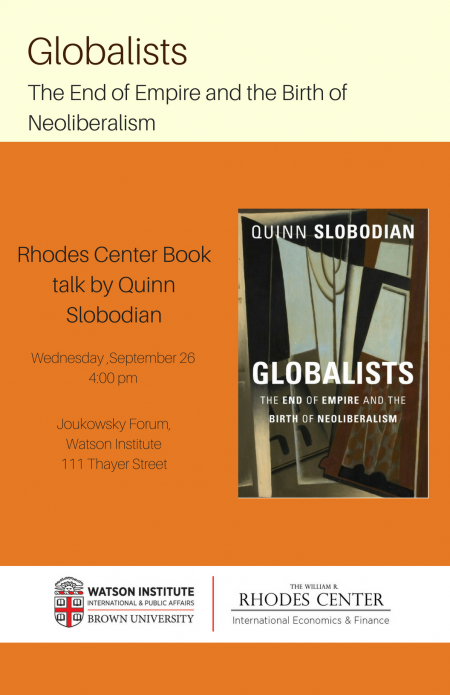 Neoliberals hate the state. Or do they? In the first intellectual history of neoliberal globalism, Quinn Slobodian follows a group of thinkers from the ashes of the Habsburg Empire to the creation of the World Trade Organization to show that neoliberalism emerged less to shrink government and abolish regulations than to redeploy them at a global level.

Quinn Slobodian is a historian of modern German and international history with a focus on North-South politics, social movements, and the intellectual history of neoliberalism. He is the author of Foreign Front: Third World Politics in Sixties West Germany, and the editor of Comrades of Color: East Germany in the Cold War World. He has just completed a book manuscript with the title Globalists: The End of Empire and the Birth of Neoliberalism and is co-editing a volume on neoliberalism with Dieter Plehwe and Philip Mirowski. His new project on the rise of international economic law has been supported by an NEH fellowship and an ACLS Frederick Burkhardt Residential Fellowship. He will spend 2017-18 in residence at the Weatherhead Initiative on Global History at Harvard University. As in his research, Slobodian’s teaching places histories of modern Europe in the history of the larger world. This goal is pursued in classes on the history of world economic orders, gender and sexuality, and cities. In Slobodian’s courses, students learn about the events and processes that shaped modern Europe while keeping an eye on the margins, and the unrealized histories of the continent's last two centuries.