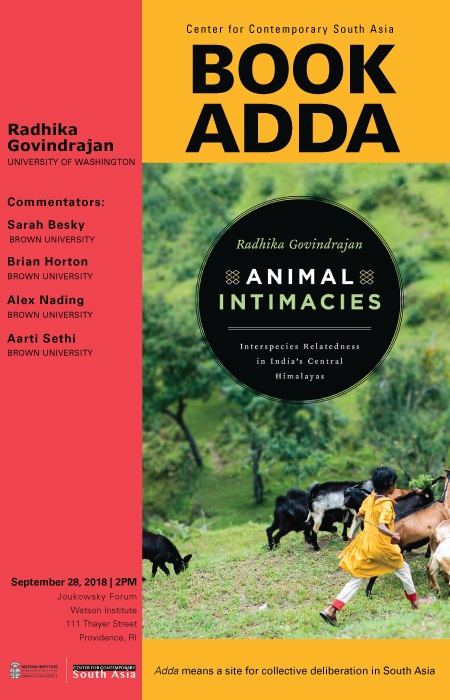 Radhika Govindrajan is assistant professor of anthropology at the University of Washington. Radhika is a cultural anthropologist who works across the fields of multispecies ethnography, environmental anthropology, the anthropology of religion, South Asian Studies, and political anthropology. Her research is motivated by a longstanding interest in understanding how human relationships with nonhumans in South Asia are variously drawn into and shape broader issues of cultural, political, and social relevance: right-wing religious nationalism; elite projects of environmental conservation and animal-rights; everyday ethical action in a time of environmental decline; and people’s struggle for social and political justice in the face of caste discrimination, patriarchal domination, and state violence and neglect.

Radhika's book Animal Intimacies (University of Chicago Press, 2018) is an ethnography of multispecies relatedness in the Central Himalayan state of Uttarakhand in India. It tells the story of how moments of everyday entanglement between the individual human and nonhuman animals whose lives crisscrossed one another’s in this mountain landscape produced an intense and intimate sense of “relatedness” between them. The book situates these discussions of multispecies relatedness in the broader context of biodiversity conservation, agrarian decline, Hindu nationalists' attempts to define the “correct” Hindu way to live ethically with animals, and a regional political movement that seeks to preserve and promote a pahari (mountain) way of life for the human and nonhuman residents of this region.