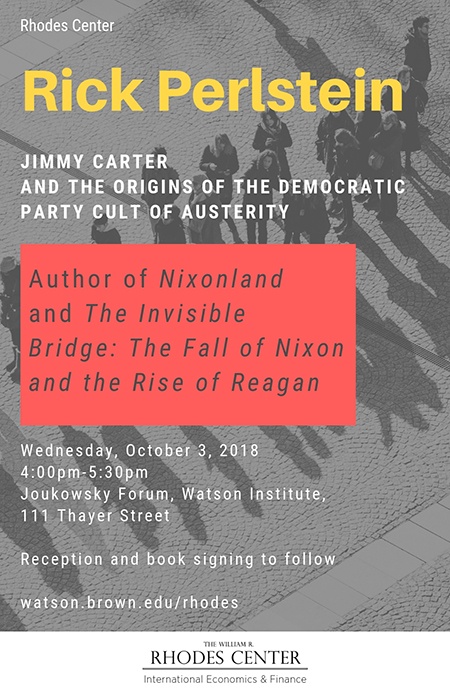 The Democratic Party's retreat from its New Deal and Great Society identity as a party eager to use the federal treasury to spend in the public interest to create a broadly shared prosperity is usually associated with the Clinton administration in the 1990s. It actually dates to the Carter administration. This talk will narrate this shift, and explained two political consequences that flowed from it: its failure to placate the Democratic Party's critics on the right, who consistently refused to recognize the shift, even as it attenuated the trust that had formerly reposed in the party among its traditional white working class constituencies.

Rick Perlstein is the author of The Invisible Bridge: The Fall of Nixon and the Rise of Reagan. Before that, he published Nixonland: The Rise of a President and the Fracturing of America (2008), a New York Times bestseller picked as one of the best nonfiction books of the year by over a dozen publications, and Before the Storm: Barry Goldwater and the Unmaking of the American Consensus, winner of the 2001 Los Angeles Times Book Award for history. A contributing writer at The Nation, former chief national correspondent for the Village Voice, and a former online columnist for the New Republic and Rolling Stone, his journalism and essays have appeared in Newsweek, The New York Times, and many other publications. Politico called him the “chronicler extraordinaire of American conservatism,” who “offers a hint of how interesting the political and intellectual dialogue might be if he could attract some mimics.” The Nation called him the “hypercaffeinated Herodotus of the American century.”