Roger Cohen ─ American Fracture: The End of the American Century and a Shared American Language 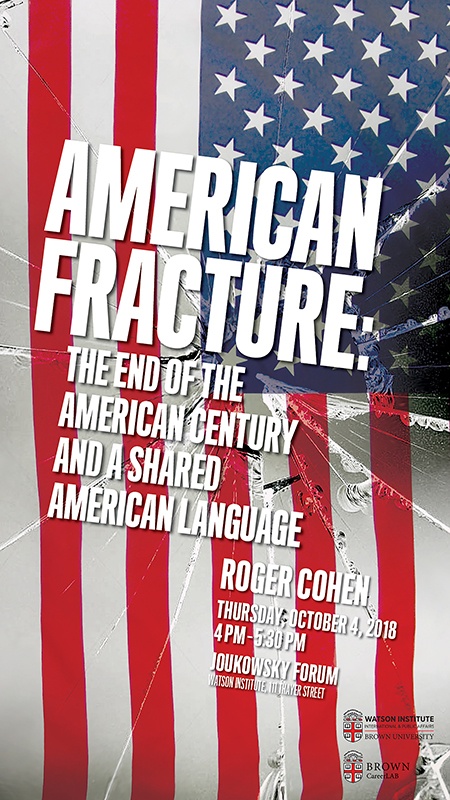 Here’s one voice from Trump country: People have to choose between heating their homes, buying food or buying health care and you want them to worry about the survival of the planet or transgender stuff? I respect business and I distrust government. That’s the American way. I don’t want illegal immigrants taking our jobs. I don’t like liberals who shop at Whole Foods talking down their noses at me because I shop at Wal-Mart. White lives matter, too, you know. We lost our discipline and our moral code in this country. So we need honest Trump to shake things up.

Honest Trump? Yes, there are now two definitions of truth in the United States. The first is that a truthful statement is one that conforms to facts. By that standard, President Trump is a serial liar. The second is that truth is “telling it like it is,” or speaking in a direct, unvarnished way without regard to political correctness. By this measure, for his supporters, Trump remains the most honest president ever.

America needs the conversations it’s not having. In part it’s not having them because it’s difficult even to agree on language any longer. Signal and noise can no longer be distinguished.

This is the chasm to which Fox News, herd-reinforcing social media algorithms, bots and trolls, Republican debunking of reason and science, the money of Koch and Mercer (and, yes, billionaire Democrats too), liberal self-obsession, rightist racism, and spreading technological autism have ushered us.

The structures that helped preserve actual community, dignity and power among working-class people—labor unions—have been systematically eroded. Main Street, having given way to the shopping and strip mall, is dead in most places. Absent anything else, blue-collar whites decided to unify around whiteness, and Trump became their mouthpiece.

Trump, in turn, stirring up division rather than trying to overcome it, choosing to lead the mob rather than his country, has taken a sledgehammer to America's values, to its responsibilities, and to the anchors of its prosperity in the post-war world. Dishonoring the United States, he has brought down the curtain on the American century.

This event is co-sponsored by the CareerLAB

Roger Cohen was named Op-Ed columnist for The New York Times in 2009.  Prior to that, Mr. Cohen wrote a column for the Times Company-owned International Herald Tribune (later The International New York Times), first for the news pages and then for the Op-Ed page.  Mr. Cohen joined The Times in 1990.  He served as a foreign correspondent for more than a decade before becoming acting Foreign Editor on September 11, 2001, and, six months later, Foreign Editor, a senior management position. That year, The New York Times won seven Pulitzer Prizes for post 9/11 coverage, including for foreign correspondence. Previously, Mr. Cohen was a foreign correspondent for The Wall Street Journal and Reuters, reporting from the Middle East, South America and Europe.  From 1977 to 1979, Mr. Cohen worked as a freelance journalist based in Paris.  He is co-founder of Speakeasy, a newspaper for students learning English, launched in 1978 by Fernand Nathan, the French publisher.  Mr. Cohen is the author of four books: “Soldiers and Slaves: American POWs Trapped by the Nazis’ Final Gamble” (Alfred A. Knopf, 2005) and “Hearts Grown Brutal: Sagas of Sarajevo” (Random House, 1998), an account of the wars of Yugoslavia's destruction.  He has also co-written a biography of General Norman Schwarzkopf, “In the Eye of the Storm,” (Farrar Straus & Giroux, 1991). His family memoir, “The Girl From Human Street: A Jewish Family Odyssey,” was published in 2015.  In 2001, Mr. Cohen won the Peter Weitz Prize from the German Marshall Fund for dispatches from Europe, an Overseas Press Club citation for a series on immigration, and the Arthur F. Burns Prize for commentary on German-American relations.  In 1999, Mr. Cohen was awarded the Overseas Press Club Citation for Excellence for “Hearts Grown Brutal: Sagas of Sarajevo,” and in 1995 he won the Overseas Press Club of America Burger Human Rights Award for his investigation of torture and murder at a Serb-run Bosnian concentration camp.  He received the Overseas Press Club of America Citation of Excellence for coverage of Third World debt in 1987, and the Inter-American Press Association “Tom Wallace” Award for feature writing in 1989.  In 2012, he received the Lifetime Achievement Award from the New Century Foundation’s International Media Council in Britain. In 2017, he won the Society of Publishers in Asia (SOPA) Excellence in Opinion Writing Award for “Australia’s Offshore Cruelty,” an examination of the treatment of refugees in Manus and Nauru. He won the same SOPA prize again in 2018 for “Myanmar is not a Simple Morality Tale.” He has been awarded the Joe Alex Morris lectureship for distinguished foreign correspondence by the Nieman Foundation for Journalism at Harvard University, has served as Ferris Professor of Journalism at Princeton University, and was the inaugural Chair of the Poynter Center at Indiana University, Bloomington. Born in London, England, Mr. Cohen, a naturalized American, received an M.A. degree in History and French from Oxford University in 1977. He speaks fluent French, Italian, Spanish and Portuguese, and good German.