Rose McDermott – The Evils of Polygyny: Evidence of Its Harm to Women, Men and Society 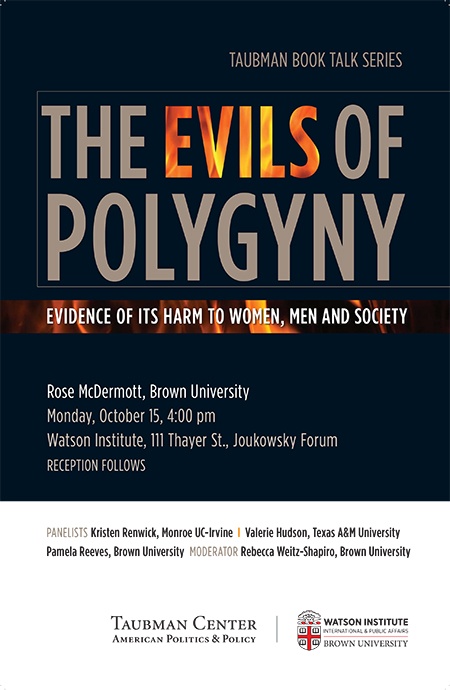 Why do men act violently toward women?

What are the consequences of "normal violence," not only for women and children but also for the men who instigate it, and for the societies that sanction it?

The Evils of Polygyny examines one powerful structural factor that instigates, enforces, and replicates patterns of male dominance: the practice of polygyny. From more than a decade’s worth of study, Rose McDermott has produced a book that uncovers the violent impact of polygyny on women, children, and the nation-state and adds fundamentally to the burgeoning focus on gender concerns in political psychology and international relations. Integrating these fields, as well as domestic policy and human rights, the author urges us to address the question of violence toward women and children. If we do not, a system that tells young women they must marry whom their elders dictate and devote their entire lives to serving others will continue to plague the contemporary world, and restrict development.

Join author and professor Rose McDermott  for a discussion of her new book, The Evils of Polygyny. Rose McDermott is the David and Mariana Fisher University Professor of International Relations at Brown University and a Fellow in the American Academy of Arts and Sciences. She is the author of five books, a co-editor of two additional volumes, and author of over two hundred academic articles across a wide variety of disciplines encompassing topics such as experimentation, emotion and decision making, and the biological and genetic bases of political behavior.

Kristen Renwick Monroe is Chancellor’s Distinguished Professor of Political Science at the University of California at Irvine and the founder and Director of the UCI Interdisciplinary Center for the Scientific Study of Ethics and Morality.

Valerie Hudson is Professor and George H.W. Bush Chair in the Department of International Affairs at The Bush School of Government and Public Service at Texas A&M University, where she directs the Program on Women, Peace, and Security.

Pamela Reeves '87, is a Senior Fellow in International and Public Affairs. She is the Senior Advisor for Gender Strategy to the Executive Office of Melinda Gates, and she is the former Director of Secretary of State Hillary Rodham Clinton’s International Fund for Women and Girls at the United States Department of State.