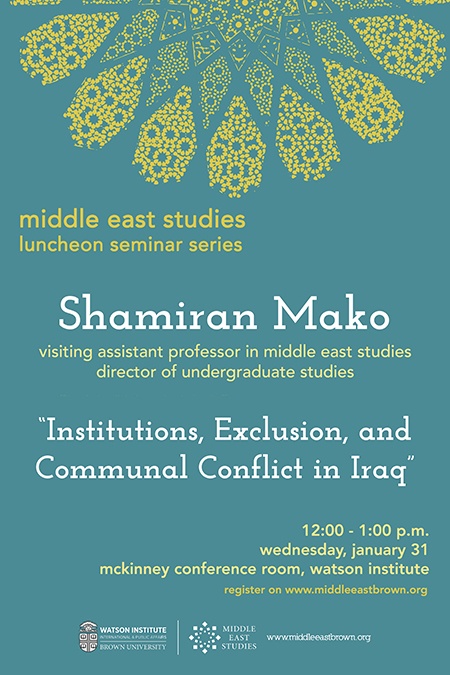 Shamiran Mako is a visiting assistant professor of Middle East Studies and Director of Undergraduate Studies at Brown University's Middle East Studies Program. She earned her Ph.D. in comparative politics and international relations from the University of Edinburgh in June 2016. and was previously a visiting scholar and lecturer at Northeastern University's International Affairs Program. Her research focuses on the international relations and comparative politics of the Middle East and North Africa, with a focus on state formation, authoritarianism, democratization, communal politics, civil wars, and post-conflict state building. She is currently working on two main book projects. The first traces the institutional legacies of ethnic conflict in Iraq and analyzes the effects of structural and institutional constraints on the mobilization calculous of communal groups prior to and post-2003. The second project, forthcoming with Cambridge University Press (Fall 2019), is a co-authored book with Professor Valentine Moghadam of Northeastern University that explains divergent outcomes of the Arab Uprisings by examining socio-economic and political factors.

The study of communal and ethnic politics in the Middle East and North Africa is often fraught with empirical and theoretical generalizations dichotomized along seemingly immutable categorical boundaries. Using Iraq as a case study, Professor Mako argues that ethnic fractionalization since 2003 is an outcome of preceding institutional constraints that shaped the mobilizing calculus of ethnic groups previously excluded from state power.

By paying attention to the longue durée, she posits that institutional constraints, on the state level, initially imposed by British colonial rule under the Mandate system, cemented Sunni-Arab dominance of the nascent state—a pattern replicated by the Ba‘thist ruling elite. This history of exclusion and repression of Iraq’s Shia, Kurds, and other minority groups shaped state-building and institutional engineering following authoritarian collapse, which intensified Sunni-Arab intransigence to accept the post-2003 order. Ultimately, adopting a temporal explanation that situates group mobilization along a historical continuum of state-society relations reframes the understanding of why preceding patterns of exclusion shape the state-building strategies of excluded groups during a democratic opening.