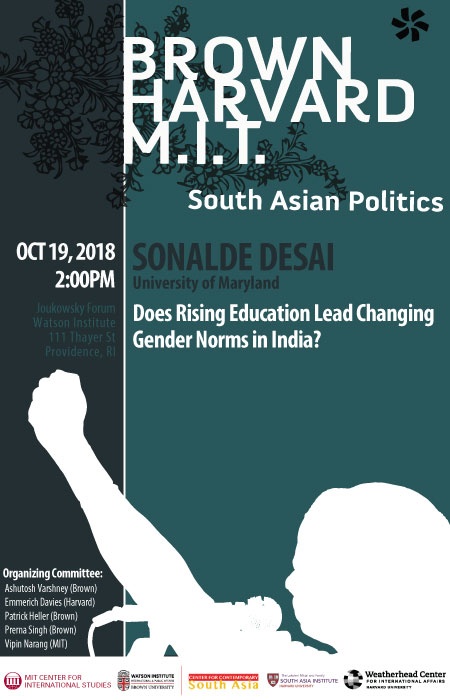 Sonalde Desai (University of Maryland) is a demographer whose work deals primarily with social inequalities in developing countries with a particular focus on gender and class inequalities. She studies inequalities in education, employment and maternal and child health outcomes by locating them within the political economy of the region. While much of her research focuses on South Asia, she has also engaged in comparative studies across Asia, Latin America and Sub Saharan Africa. She has published articles in a wide range of sociological and demographic journals including American Sociological Review, Demography, Population and Development Review and Feminist Studies. Professor Desai is currently examining changes in the nature and composition of Indian middle classes in the context of India’s movement from state-capitalism to market-capitalism and increasing involvement in the global economy. Sonalde Desai and Reeve Vanneman, in collaboration with National Council of Applied Economic Research in New Delhi, have just completed a multi-sectoral survey of over 40,000 households across India which provides a rich resource for research on the relationship between poverty, gender inequality and public policy on the one hand and different dimensions of human development on the other. This is India's first large panel survey conducted in 2004-5 and 2011-12, covering a period of rapid social change. This survey, titled India Human Development Survey, was funded by the National Institutes of Health, The Ford Foundation and UK Department of International Development. These data are publicly available to all researchers and are being used by more than 9000 users worldwide. Further information is available at http://ihds.umd.edu. Ongoing studies based on these data include intersection between caste and gender in India; changing nature of social stratification and caste inequalities; role of affirmative action in shaping education inequalities in India; gender inequalities in access to health services; and, the role of social capital in shaping access to opportunities. Sonalde Desai holds a joint appointment with National Council of Applied Economic Research (NCAER), New Delhi, where she is a Senior Fellow and Director of National Data Innovation Centre, a collaborative enterprise between NCAER, University of Maryland and University of Michigan. This Center is funded by a grant from Bill & Melinda Gates Foundation.