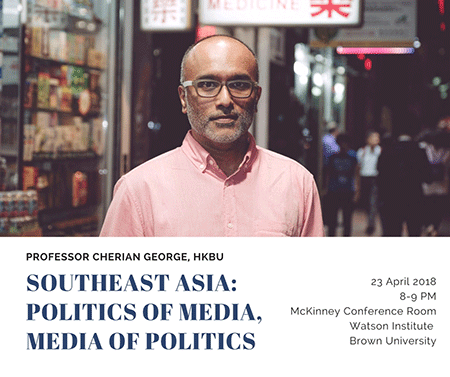 Dinner will be provided.

Join the Southeast Asian Studies Initiative and Brown University Merlions for a skype conversation with Cherian George, a Professor of Media Studies in the Journalism department of Hong Kong Baptist University.

His research interests centre on freedom of expression, especially in connection to journalism and public discourse. He studies censorship, media systems and alternative media. His current research focuses on religious intolerance and its implications for freedom of expression. His books include Hate Spin: The Manufacture of Religious Offense and its Threat to Democracy (MIT Press, 2016).

He is the author of four other books, focusing on media and politics in Singapore. Since 2013, he has been the editor of the journal Media Asia.

Until February 2014, he was an Associate Professor at the Wee Kim Wee School of Communication and Information, Nanyang Technological University. He ran its journalism division for a few years, and in 2010 received a Nanyang Award for teaching excellence. He launched and ran the Asia Journalism Fellowship, an initiative of Temasek Foundation and NTU. He left Singapore for Hong Kong in 2014.