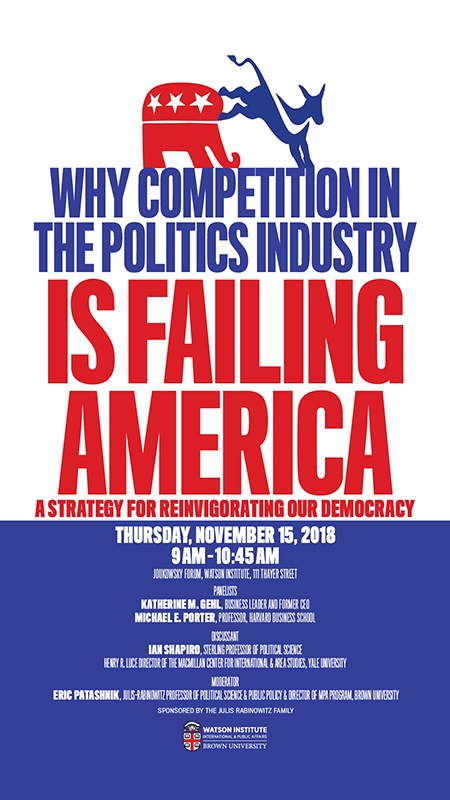 Many Americans are concerned about the dysfunction and lack of effective problem-solving from Washington, DC, but what are the sources of our political problems and how do we address them? In this panel, a former CEO (Katherine M. Gehl) and a leading professor of business (Michael E. Porter, Harvard University) offer a new approach to understanding the poor performance of the US political system. They argue that our governance problems are not due to the parties’ ideological incoherence, or because of an increasingly polarized American public. Those who focus on these reasons, they argue, are looking in the wrong places.

Drawing on insights from research on industrial organizations, Gehl and Porter argue that our political problems are not due to a single cause, but rather to a failure of the nature of the political competition in American democracy. This type of analysis has been used for decades to understand competition in other industries and sheds new light on the failure of politics because politics in America has become, in Gehl and Porter's view, a major industry that works like other industries.

Gehl and Porter use this lens to put forth an "investment" thesis for political reform and renewal and discuss the changes that would be needed to better align the US political system with the public interest and make progress on the nation’s problems.

Katherine M. Gehl is a business leader, author and speaker. Katherine was president and CEO of Gehl Foods, a $250 Million high-tech food manufacturing company in Wisconsin where she led a transformational growth strategy, receiving multiple awards, before selling the company in 2015—in part to dedicate more time to political reform. Her career includes roles in the private and public sectors including at Oracle Corporation, Bernstein Investment Research and Management, Mayor Richard M. Daley’s Office at the City of Chicago, and Chicago Public Schools. In 2011, Katherine was confirmed by the U.S. Senate to serve on the Board of the Overseas Private Investment Corporation. Today, Katherine describes herself as a political innovation activist. Katherine graduated from the University of Notre Dame and holds an MA from Catholic University and an MBA from Kellogg.

Michael E. Porter is an economist, researcher, author, advisor, speaker and teacher. Throughout his lifetime career at Harvard Business School, he has brought economic theory and strategy concepts to bear on many of the most challenging problems facing corporations, economies and societies, including market competition and company strategy, economic development, the environment and healthcare. Michael’s approach is based on understanding the overall economics and structure of complex systems, in contrast to particular elements or parts. His extensive research is widely recognized in governments, corporations, NGOs, and academic circles around the globe and has received numerous awards. Michael is the author of nineteen books and over 130 articles is the most cited scholar today in economics and business. Michael graduated from Princeton University and holds an M.B.A. from Harvard Business School and a Ph.D. from Harvard’s Department of Economics.

Ian Shapiro is Sterling Professor of Political Science at Yale University, where he also serves as Henry R. Luce Director of the MacMillan Center for International and Area Studies. He has written widely and influentially on democracy, justice, and the methods of social inquiry. In democratic theory, he has argued that democracy’s value comes primarily from its potential to limit domination rather than, as is conventionally assumed, from its operation as a system of participation, representation, or preference aggregation. In debates about social scientific methods, he is chiefly known for rejecting prevalent theory-driven and method-driven approaches in favor of starting with a problem and then devising suitable methods to study it. A native of South Africa, Shapiro received his J.D. from the Yale Law School and his Ph.D from the Yale Political Science Department where he has taught since 1984 and served as chair from 1999 to 2004. Shapiro is a fellow of the American Academy of Arts and Sciences and the American Philosophical Society, and a member of the Council on Foreign Relations. He is a past fellow of the Carnegie Corporation, the Guggenheim Foundation, and the Center for Advanced Study in the Behavioral Sciences. He has held visiting appointments at the University of Cape Town, Keio University in Tokyo, Sciences Po in Paris, the Institute for Advanced Study in Vienna, the University of Oslo, and Nuffield College, Oxford. His most recent books are The Real World of Democratic Theory; Containment: Rebuilding a Strategy against Global Terror; and The Flight From Reality in the Human Sciences. His new book, Politics Against Domination, will be published by Harvard University Press in 2016. His current research concerns the relations between democracy and the distribution of income and wealth.

Sponsored by the Julis Rabinowitz Family