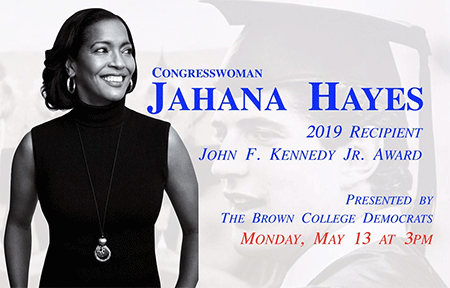 After serious deliberation, the Brown College Democrats is thrilled to honor Congresswoman Jahana Hayes of Connecticut with the 2019 John F. Kennedy Jr. Award!

Congresswoman Hayes is a first term representative and the first African American woman to represent Connecticut in the House. She was recognized by President Obama as the 2016 National Teacher of the Year, hailing from John F. Kennedy High School in Waterbury, CT. During her time in Congress, Rep. Hayes has prioritized education--and has feuded with Sec. of Education Betsy DeVos--and common sense gun control reform. She is one of the brightest young Democratic stars, and we could not be more excited to give her this year's JFK Jr. Award.

Named after a founder of the Brown College Democrats, the John F. Kennedy Jr. '83 Award for Inspiring Youth in Politics is presented on campus each year to an elected official who embodies the progressive values of the organization. Recent recipients include Governor Maggie Hassan '80, Congressman Patrick Murphy, Congressman Seth Moulton, Congressman John Lewis, and Fmr. Missouri Secretary of State Jason Kander.