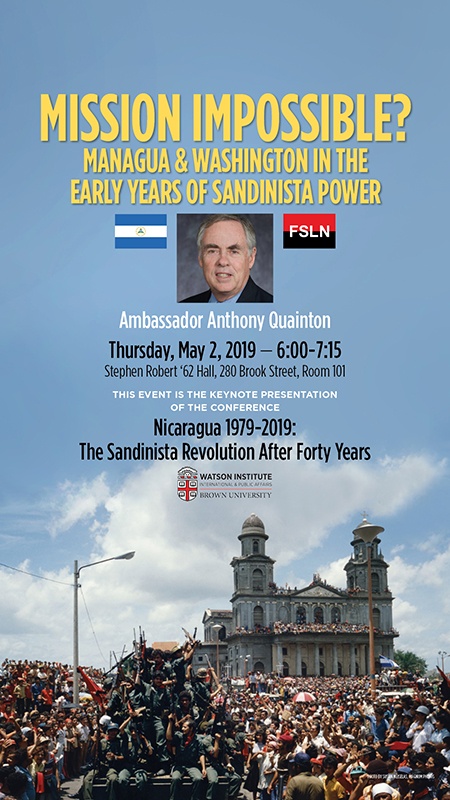 This event is the keynote presentation of the conference Nicaragua 1979-2019: The Sandinista Revolution After Forty Years

To register, please go to the conference registration page.

In his keynote presentation Ambassador Quainton will be reflecting on the difficulty of managing two conflicting and contradictory policies towards the Sandinista Revolution: on the one hand the State Department's search for a negotiated outcome to the Central American crisis and on the other the White House's commitment to regime change in Nicaragua. He will explore the problem of analyzing and credibly reporting on an emotionally charged and highly nuanced situation against the background of Cold War politics and assumptions.

Ambassador Anthony Quainton is currently Distinguished Diplomat in Residence at American University in Washington DC in the School of International Service. He has held this appointment since September 2003. Prior to joining the faculty Ambassador Quainton spent 38 years as a member of the United Stated Foreign Service. He held posts as Ambassador to Peru, Kuwait, Nicaragua and the Central African Republic. He had earlier posts in Australia, Pakistan, India, Nepal and France. He also served as Director General of the Foreign Service, Assistant Secretary of State for Diplomatic Security and Coordinator of the Office for Combating Terrorism. He retired from the Foreign Service in 1997 and subsequently was President and CEO of the National Policy Association from 1998 to 2003. Ambassador Quainton received his BA from Princeton University and a B.Litt degree from Oxford University as a Marshall Scholar. He is married to a fellow Marshall Scholar, Susan Long Quainton. They have three children and seven grandchildren.