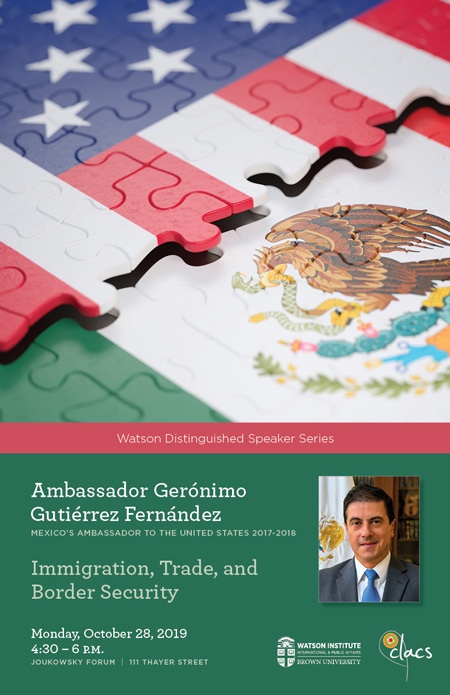 A lecture by former Mexican Ambassador to the U.S.

The United States and Mexico have much at stake in their relationship. Not only do they share a 2000-mile border – the most frequently crossed in the world – but they trade approximately 1.6 billion dollars of goods and services each day. In fact, Mexico is now the United States top trading partner. These neighbors face common challenges that range from immigration, economy, security and law enforcement. Additionally, they are members of multilateral fora in which they must deal with all sorts of international issues, sometimes from the same perspective and others from quite opposite angles.

Ambassador Gerónimo Gutiérrez Fernández will analyze the most salient aspects how this relationship has evolved over its different phases, including the current challenge to find common ground on how to handle migration and economic stability.

Gerónimo Gutiérrez Fernández served as Mexico’s Ambassador to the United States (2017-2018) during a time in which the bilateral relation experienced significant changes and challenges under a new U.S. Administration; and he played a prominent role in the negotiation of the United States of America, Mexico and Canada Agreement (USMCA). He is currently a Managing Partner of BEEL Infrastructure, a specialized advisory & asset management firm focused on the infrastructure sector in Latin America. He has a diverse professional career, with over 20 years of experience at senior government positions under five presidents in the areas of finance, trade, national security and diplomacy.

From 2010 to 2016, he served as Managing Director of the North American Development Bank (NADB) headquartered in San Antonio, Texas. Between 2009 and 2010, he served as Mexico's Deputy Secretary for Governance and Homeland Security, with the main responsibility of identifying threats to the country’s democratic governance and national security, and coordinating the Government’s prevention and response measures. During this time, he was also a member of the National Security Council’s Executive Committee. From 2006 to 2009, he served as Under Secretary for Latin America and the Caribbean in the Foreign Ministry responsible for normalizing the Mexico-Cuba relationship after a strained period, as well as the re-establishment of ambassadors with Venezuela. Also, he actively worked, along with other government agencies, on strengthening security and anti-narcotics cooperation with several Latin American and Caribbean countries. As Under Secretary for North America, from 2003 to 2006, he coordinated day-to-day trilateral and bilateral affairs with Mexico’s North American partners (United States and Canada). Gutiérrez has also held other federal government positions in the Ministries of Economy and Treasury Department, the Office of the President and Banobras (Mexico’s national public works bank). On the political front, he worked as part of President-elect Vicente Fox’s transition team, as Director of Miguel Estrada Iturbide Foundation, the Partido Acción Nacional’s (Mexico center-right party) think-tank and as Chief of Staff of its Parliamentary Group.

Gutiérrez holds a B.A. in Economics from the Instituto Tecnológico Autónomo de México (ITAM) where he also finished his B.A. in Political Science and a Master in Public Administration from Harvard’s John F. Kennedy School of Government, for which he received a Fulbright-Garcia Robles Scholarship.