Anton-Lippitt Lecture on Urban Affairs – Houston: Prophetic City – What Houston Can Teach the Rest of the Country 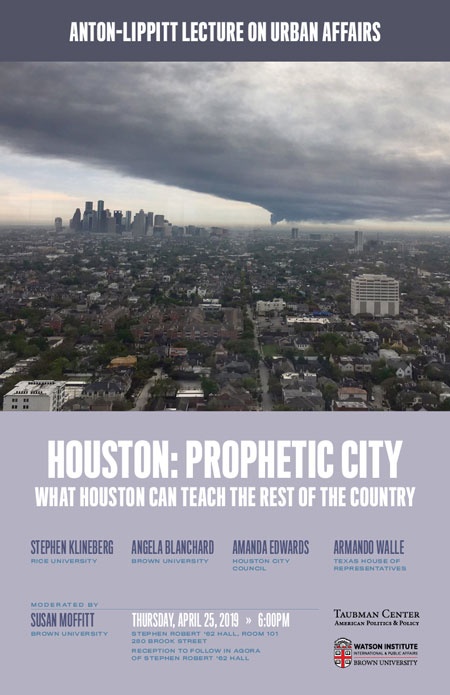 Reception to follow in Agora of Stephen Robert '62 Hall

This year’s Anton-Lippitt lecture will focus on the theme of community engagement, citizenship, and partnerships.

The open keynote event features Stephen L. Klineberg, Professor Emeritus of Sociology at Rice University and the founding-director of the Kinder Institute for Urban Research.

Houston clearly exemplifies the trends that are refashioning the social and political landscape across America. The new high-tech, knowledge-based, fully global economy is generating mounting inequalities based primarily on access to quality education. At the same time, an epic transformation is underway, as this city and country, once predominantly composed of European nationalities, is rapidly becoming a microcosm of all the world’s ethnicities and religions. And as urban regions compete for the “knowledge workers” in the new economy, quality-of-place attributes now increasingly determine the fates of cities. The panel reviews the findings from 38 years of systematic surveys to show how the new realities are unfolding, to assess the changing attitudes and beliefs of the general public, and to consider the implications of these ongoing trends for the challenges and opportunities that lie ahead.

Together with several panelists, Professor Klineberg will discuss how some destination cities have evolved toward inclusion and explore the institutions and strategies that support inclusive evolution.

Moderated by: Susan Moffitt, Director of the Taubman Center for American Politics and Policy

A graduate of Haverford College, with an M.A. from the University of Paris and a Ph.D. from Harvard, Stephen Klineberg is Professor Emeritus of Sociology at Rice University and the founding-director of the Kinder Institute for Urban Research.

In 1982, he and his students launched an annual study, now called the “Kinder Houston Area Survey,” that has been tracking for the past 38 years the demographic patterns, economic outlooks, experiences, and beliefs of local residents. The research has attracted great interest and generous support from foundations, corporations, and individuals in the wider Houston community and beyond.

He has published a series of reports on this research and is completing a book this year, under contract with Simon & Schuster, exploring the national implications of the survey findings, entitled Prophetic City: Houston on the Cusp of a Changing America. He is the recipient of twelve major teaching awards, including the George R. Brown Lifetime Award for Excellence in Teaching and the Piper Professor Award.

Klineberg is a much sought-after speaker, and as co-author of The Present of Things Future: Explorations of Time in Human Experience, has written numerous articles and appears frequently on radio and television, and in the print and social media.

In the midst of leading BakerRipley’s long-term disaster recovery efforts following Hurricane Harvey, Blanchard was recognized as the recipient of the 2017 Heinz Award in the Human Condition.

Angela joined the Brown University community in January 2018 as a Swearer Center Social Entrepreneur in Residence.

Amanda K. Edwards serves as the Houston City Council Member in At-Large Position 4. She is also an attorney and native Houstonian with a passion for building communities through public service. Currently, Amanda serves as Vice Chair of the Budget and Fiscal Affairs Committee. She also serves on the Economic Development Committee and the Transportation, Technology and Infrastructure Committee. Amanda strives to innovatively address the city’s fiscal challenges and its urban core needs to move all of Houston forward so that it can be the place where the Gulf Coast and the world’s future meet.

Since joining City Council, Amanda initiated and led the Mayor’s Technology & Innovation Task Force to build a more robust innovation economy in Houston, and now sits on the Houston Exponential Board of Directors. She also serves on the Houston-Galveston Area Council Transportation Policy Council, where she serves as Co-Chair of its High Capacity Transit Task Force in an effort to address the region’s mobility needs via multi-modal transit options. Amanda launched and now leads the City of Houston Women and Minority-Owned Business Task Force to assist Houston women and minority business owners with gaining access to capital and scaling up their businesses Amanda has championed the City’s Complete Communities Initiative; promoted public art through her Super Bowl Community & Youth Public Art Mural Project; and launched the Council Member Edwards’ Community Empowerment Signature Series to empower Houston teens, adults, and seniors to be the solution in their respective communities.

Dr. Susan Moffitt is the Director of A. Alfred Taubman Center for American Politics and Policy and an Associate Professor of Political Science and International and Public Affairs at Brown University. Her research focuses on American political institutions and public policy while also examining the politics of information gathering, distribution, and use, with particular emphasis on developing the capacity to implement policy in the fields of public education and public health.