Bilal Baloch — Crisis and Credibility: The Politics of Ideas in India and Developing Democracies 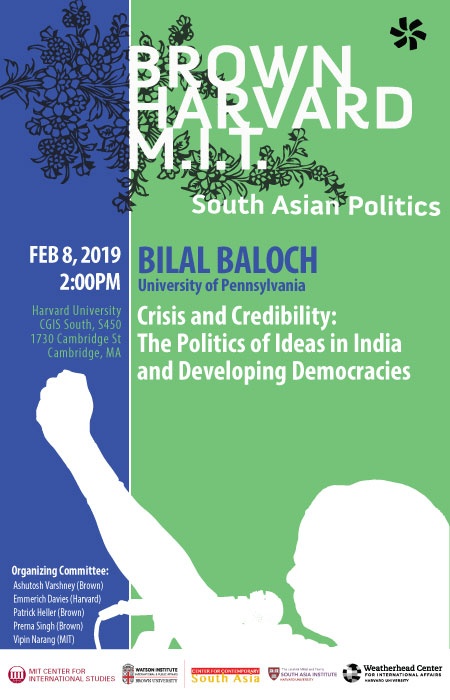 Bilal Baloch is a Postdoctoral Research Fellow at CASI as well as Lecturer and Regional Director of the South Asia and Middle East & North Africa program at the Lauder Institute, Wharton School at the University of Pennsylvania. At CASI Bilal focuses on the political economy of government behavior in India and other developing democracies. Here, he is revising his doctoral dissertation, Crisis, Credibility, and Corruption: How Ideas and Institutions Shape Government Behavior in India, into a monograph.

Bilal has presented academic papers at several international conferences, including the annual meetings of the American Political Science Association and the International Studies Association. In addition to his scholarly publications, his commentary has appeared in a number of outlets including The Guardian, Foreign Policy, The Washington Post, and The Hindu.

Prior to his doctoral studies, Bilal was Chief of Staff to Dean Vali Nasr at the Johns Hopkins School of Advanced International Studies (SAIS) in Washington, DC. While at SAIS, he co-founded the annual SAIS Emerging Markets Series alongside former First Deputy Managing Director of the IMF, John Lipsky. He also assisted in editing and contributed research toward Nasr’s book, The Dispensable Nation: American Foreign Policy in Retreat (2013). Bilal has taught undergraduate and graduate courses in international security, political economy, and comparative politics at Tufts University and the University of Pennsylvania.

Bilal completed his undergraduate studies in philosophy, logic, and the scientific method at The London School of Economics where he was the Anthony Giddens Scholar, and holds a Master’s degree in international relations from the Fletcher School of Law and Diplomacy at Tufts University where he was the Samuel J. Elder Scholar. He earned his doctorate in political science with graduate funding from Oxford University. You can follow him @BilalABaloch