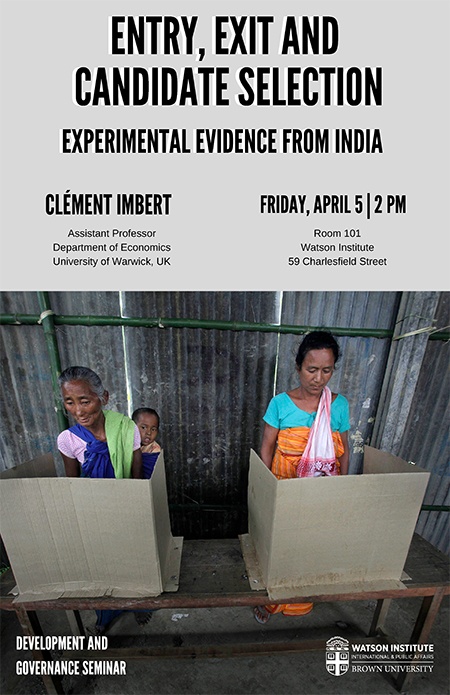 Clément Imbert is an assistant professor in the Department of Economics at the University of Warwick, UK. Professor Imbert will present a paper co-authored with Abhijit Banerjee, Esther Duflo and Rohini Pande.

What motivates candidates to run in low income democracies? We examine the electoral impact of a voter awareness campaign which emphasized the responsibilities of local leaders in implementing a nation-wide public employment program. The intervention led to exit by the worse performing incumbents, substitution by incumbent family members and entry by challengers from traditionally disadvantaged groups (female and non-general castes). These challengers lived in poorer villages which had received less public employment in the past, which suggests that they were motivated by the possibility to be in charge of the program. We do not find that program implementation improved after the elections. There are, however, positive effects on representation of women and lower caste in the next election round.

Co-sponsored by the Development and Governance Seminar and the Population Studies and Training Center.