Commencement Forum ─ The Future of Media and Political Engagement 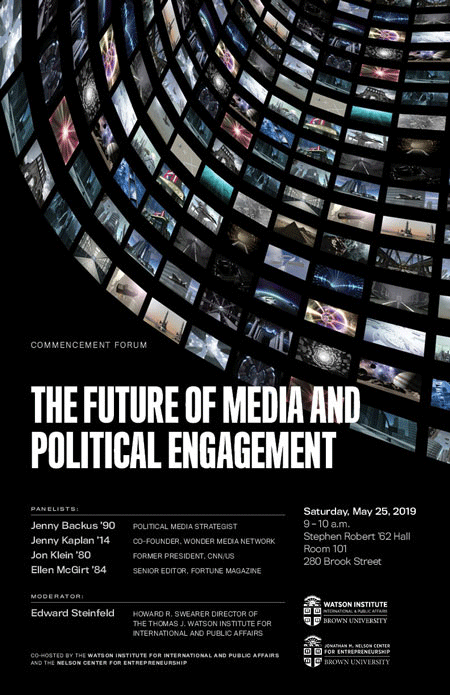 For the past decade, media and news companies have experienced rapid disruption and digital evolution. In today's economic and political climate, the future of the media is at a pivotal point in history. Join the Watson Institute for International and Public Affairs and the Nelson Center for Entrepreneurship for a panel featuring Brown alumni who are operating at the intersection of commerce, politics, new technology, startups, and news.

Co-sponsored by the Watson Institute and the Nelson Center for Entrepreneurship.

Jenny Kaplan is the co-founder & CEO of Wonder Media Network (WMN), an audio-first media company focused on amplifying voices that are underrepresented. Jenny is an award-winning journalist who decided to quit her job at Bloomberg News to start something new. At Bloomberg, Jenny covered global business, touching on everything from Coca-Cola to cannabis. She also developed and co-hosted Bloomberg’s Material World podcast, where she fell in love with audio. Jenny graduated from Brown University in 2014, where she concentrated in International Relations and focused on the Middle East.

A nationally recognized spokesperson and expert on strategic communications and partnerships, Backus has worked for Fortune 500 companies, national trade associations and NGOs and in the political arena serving in leadership positions in the U.S. House, the U.S. Senate, and on Presidential campaigns, including managing more than 40 Presidential Primary Debates and Forums and events for the national media in the 2004 and 2008 Presidential cycles.

Most recently Backus served for three years as a senior policy advisor and head of Strategic Partnerships and Engagement for Google where she developed Google’s state by state public affairs teams and strategic plans, managed all Google’s U.S. NGO and third party relations and oversaw a multi-million dollar public affairs and policy budget. Backus also served in the first two years of the Obama Administration as the acting assistant secretary for Public Affairs (ASPA) and the principal deputy assistant secretary for Strategy & Planning at the U.S. Department of Health and Human Services (HHS) working closely with then Secretary Kathleen Sebelius and the White House.

Ellen McGirt is a senior editor at FORTUNE. In addition to long-form magazine features, she writes RaceAhead, an award-winning daily column on race, culture and inclusion in corporate life and beyond. She is also the co-chair of FORTUNE’s CEO Initiative. In the past, she’s worked for Time, Money, and most recently, Fast Company, where she wrote or contributed to more than twenty cover stories, and created the digital series the 30 Second MBA. Her reporting has taken her inside the C-Suites of Facebook, Nike, Twitter, Intel, Xerox, and Cisco; on the campaign trail with Barack Obama and across Africa with Bono to study breakthrough philanthropy. Ellen was the editor for Your First Leadership Job, a book published by Wiley in 2015. The New York City native attended Brown University and now lives in the Midwest with her family. Ask her about fly-fishing if you get the chance.

Jon Klein is President of Vilynx, an artificial intelligence platform that enables media companies to understand their content and how it is used better than ever before. He is also co-founder and co-chairman of TAPP Media, a subscription video platform for personalities with super-fan followings that is backed by Discovery Communications and Google’s Eric Schmidt. In addition, Jon serves as President of the board of directors of WBRU, helping the student owner/managers navigate their transition from FM station to multi-platform digital workshop.

As President of CNN/U.S. from 2004-2010, Jon revived a struggling brand by integrating technology to support a renewed commitment to in-depth journalism. CNN attained record ratings under Klein’s leadership, doubling profits while winning the most awards in its history, including multiple Peabody, Emmy, and DuPont Columbia honors. Many of those he hired and showcased, and the franchises he created, remain CNN mainstays today – including Fareed Zakaria, Anderson Cooper, Dr. Sanjay Gupta, CNN Heroes, The Situation Room, State of the Union, and CNN Newsroom.

Jon is a sought-after media analyst and thought leader, frequently appearing in the Op-Ed pages of publications such as the New York Times and Washington Post, and on networks including CNN, Fox News, MSNBC, CNBC, Bloomberg and NPR.