Catherine Fennell ─ Ends of the House: Deconstructing the Dream in the Late Industrial Urban Midwest 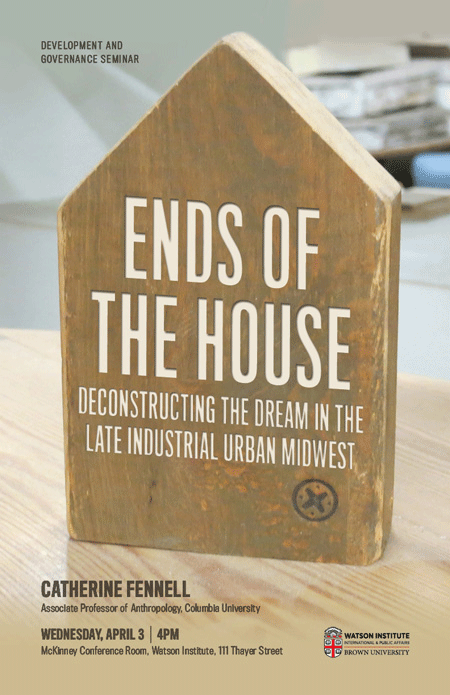 This anthropological paper focuses on the burgeoning house deconstruction movement in the late industrial urban Midwest. Through this case, it maps an emerging ethos of collective life predicated upon embracing, rather than denying or resenting intense forms of ecological and economic degradation.

Catherine Fennell is an associate professor of anthropology at Columbia University. Her work focuses on the decline and transformation of a key infrastructure of the 20th century US welfare state -- subsidized housing. She interrogates how the material and social legacies of such housing shape the politics of difference, collective care and obligation, and utopian imagination in the urban Midwest. A recent book, Last Project Standing: Civics and Sympathy in Post-Welfare Chicago (Minnesota 2015), interrogates how an effort to demolish and rebuild troubled public housing projects also became one to rebuild the kinds of citizens who would be capable of caring for themselves and others, far better than any failed welfare bureaucracy. An emerging project follows how inhabitants of "shrinking cities" manage the physical aftermaths of houses that have ceased being homes and have instead become waste. She also has interests in urban infrastructure and the urban sensorium. Her ethnographic and archival work and her writing has been supported by the National Science Foundation, The Horowitz Foundation, The Josephine de Karman Fellowship Trust, the Black Metropolis Research Consortium, The Russell Sage Foundation, and the Quadrant Initiative at the University of Minnesota, and the US Department of Housing and Urban Development.