Eric Weitz ─ A World Divided: The Global Struggle for Human Rights in the Age of Nation-States 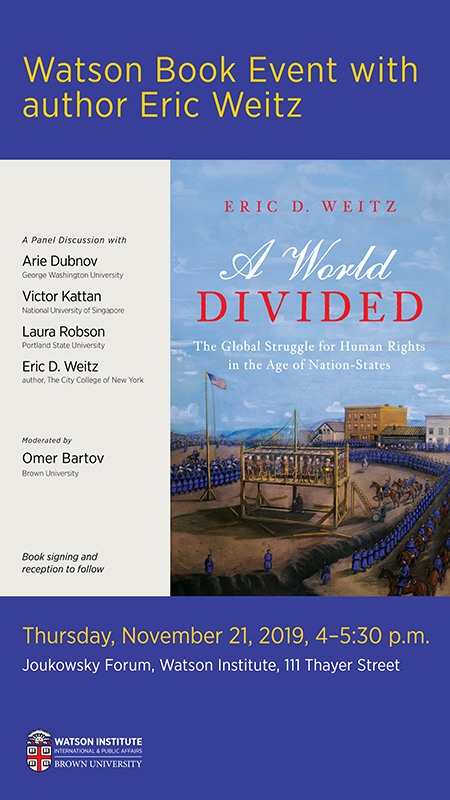 Once dominated by vast empires, the world is now divided into close to 200 independent countries with laws and constitutions proclaiming human rights—a transformation that suggests that nations and human rights inevitably developed together. But the reality is far more problematic, as Eric Weitz shows in this compelling global history of the fate of human rights in a world of nation-states.

Through vivid histories drawn from virtually every continent, A World Divided describes how, since the eighteenth century, nationalists have struggled to establish their own states that grant human rights to some people. At the same time, they have excluded others through forced assimilation, ethnic cleansing, or even genocide. From Greek rebels, American settlers, and Brazilian abolitionists in the nineteenth century to anticolonial Africans and Zionists in the twentieth, nationalists have confronted a crucial question: Who has the "right to have rights?" A World Divided tells these stories in colorful accounts focusing on people who were at the center of events. And it shows that rights are dynamic. Proclaimed originally for propertied white men, rights were quickly demanded by others, including women, American Indians, and black slaves.

A World Divided also explains the origins of many of today's crises, from the existence of more than 65 million refugees and migrants worldwide to the growth of right-wing nationalism. The book argues that only the continual advance of international human rights will move us beyond the quandary of a world divided between those who have rights and those who don't.

Eric D. Weitz, author,  is Distinguished Professor of History at City College and the Graduate Center, City University of New York. His books include Weimar Germany: Promise and Tragedy and A Century of Genocide (both Princeton). He lives in Princeton and New York City.

Victor Kattan, Senior Research Fellow at the Middle East Institute and an Associate Fellow at the Faculty of Law at the National University of Singapore (NUS)