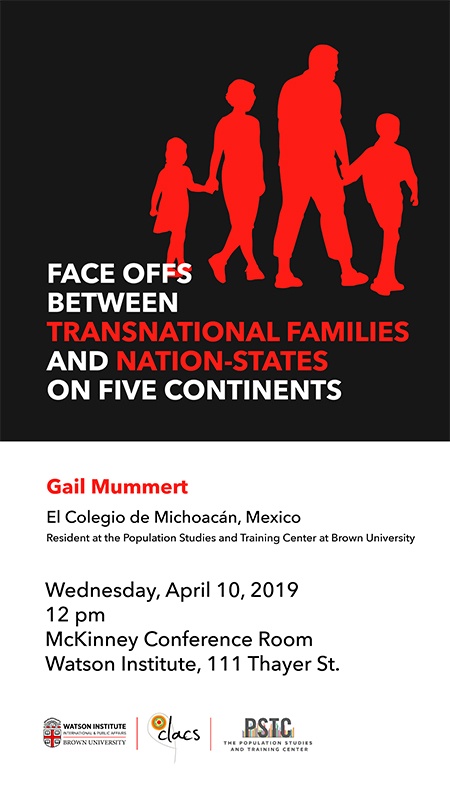 Gail Mummert is a resident at Brown’s Population Studies Training Center (PSTC). With an undergraduate degree in International Relations in the U.S., Mummert then trained as a demographer in Mexico City and as a social anthropologist in Paris. From this interdisciplinary standpoint, she has studied novel forms of family life and gender relations in the face of sweeping social and cultural change in rural Mexico from the latter half of the twentieth century into the beginning of the twenty-first. She has also analyzed long-distance caregiving arrangements for the young and the old, comparing practices in countries such as Mexico, China, the Philippines, and Ecuador.

In her action-oriented research with migrant families in the central-western state of Michoacán, Mexico, Mummert has developed a model for understanding and tending to the specific needs of three vulnerable groups: adolescents, the elderly, and wives abandoned by their husbands. By organizing artistic workshops and creating multimedia teaching materials, she has contributed to the emotional wellbeing of rural populations and to the strengthening of their intergenerational ties.

As visiting scholar at PSTC, Mummert is undertaking a book-writing project. Her book entitled Face offs between transnational families and nation-states on five continents will offer an original, comparative look at the myriad ways in which transnational family members in the Americas, Africa, Europe, Asia, and Oceania experience global structural readjustments, interact with diverse agents of Nation-states, regroup in the face of setbacks, and reinvent being a family living apart in their struggle to get ahead. Invoking narratives of sacrifice, uncertainty and risk, kin groups both observe and confront controls, policies, and regulations implemented by governments. At the same time, they stake claims to human, family, and children’s rights.