Governor Frank Licht ’38 Lecture — Susan Rice: Tough Love: My Story of the Things Worth Fighting For 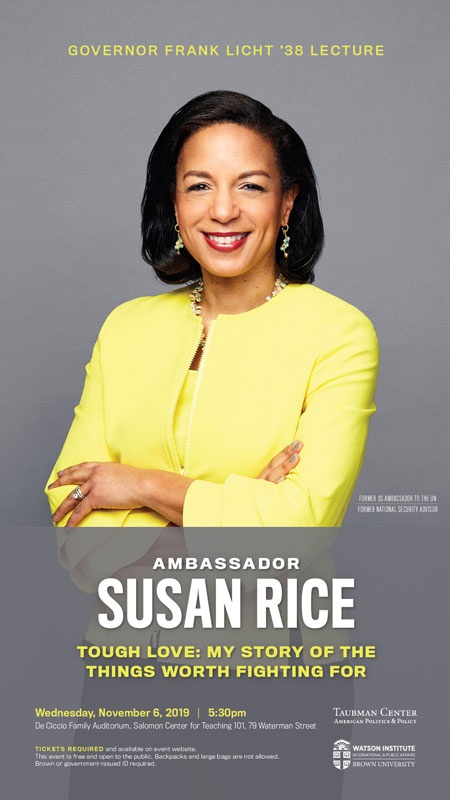 Tickets are required and limited and a Brown or government-issued ID is required for entry to the event.  Please sign up for tickets here.https://lichtsusanrice.eventbrite.com

Disclaimer: Given this is a free event, we release more tickets than capacity with the assumption there will be inevitable attrition. Please arrive early to guarantee admission. BOOK SIGNING TO FOLLOW.

Susan Rice wrote Tough Love to explore her family history, unflinchingly revisit some painful aspects of her childhood, ask herself the hard questions of where and why she has succeeded and failed, and what lessons she has learned –sometimes the hard way. In the process, Rice shares her unique insider’s insight into the internal decision-making on some of the toughest national security issues facing the Clinton and Obama administrations.

Ambassador Susan E. Rice is currently Distinguished Visiting Research Fellow at the School of International Service, American University, and a Non-Resident Senior Fellow at the Belfer Center for Science and International Affairs at Harvard’s Kennedy School of Government. She is also a Contributing Opinion Writer for the New York Times.

As U.S. Permanent Representative to the United Nations and a member of President Obama's Cabinet (2009-2013) to which she was unanimously confirmed by the Senate, Rice worked to advance U.S. interests, defend universal values, strengthen the world's security and prosperity, and promote respect for human rights. In a world of 21st Century threats that pay no heed to borders, Ambassador Rice helped rebuild an effective basis for international cooperation that strengthened the United States’ ability to achieve its foreign policy objectives and made the American people safer.

From 2002-2008, Rice was a Senior Fellow at the Brookings Institution, where she conducted research and published widely on U.S. foreign policy, transnational security threats, weak states, global poverty and development.

Ambassador Rice served as U.S. Assistant Secretary of State for African Affairs from 1997-2001. In that role, she formulated and implemented U.S. policy towards 48 countries in Sub-Saharan Africa and was responsible for the management of all of the U.S. Embassies and more than 5,000 U.S. and Foreign Service national employees. Rice was co-recipient of the White House's 2000 Samuel Nelson Drew Memorial Award for distinguished contributions to the formation of peaceful, cooperative relationships between states. From 1993-1997, she served as Special Assistant to the President and Senior Director for African Affairs at the National Security Council at the White House, as well as Director for International Organizations and Peacekeeping on the National Security Council staff.

Rice began her career as a management consultant with McKinsey and Company where she served natural resource, industrial and some consumer companies.

She is currently on the boards of Netflix (NASDAQ: NFLX) and the John F. Kennedy Center for the Performing Arts. Ambassador Rice previously served as an independent Director of the Bureau of National Affairs (now Bloomberg BNA) and on many non-profit boards. Rice received her Master's degree (M.Phil.) and Ph.D (D.Phil.) in International Relations from New College, Oxford University, England, where she was a Rhodes Scholar. She was awarded the Chatham House-British International Studies Association Prize for the most distinguished doctoral dissertation in the United Kingdom in the field of International Relations in 1990. Ambassador Rice received her B.A. in History with honors from Stanford University in 1986, where she was junior Phi Beta Kappa and a Truman Scholar. In 2017, French President Francois Hollande presented Ambassador Rice with the Award of Commander, the Legion of Honor of France, for her contributions to Franco-American relations.

A native of Washington DC, Ambassador Rice is married to Ian Cameron, and they have two children. She is an avid tennis player and retired basketball player.