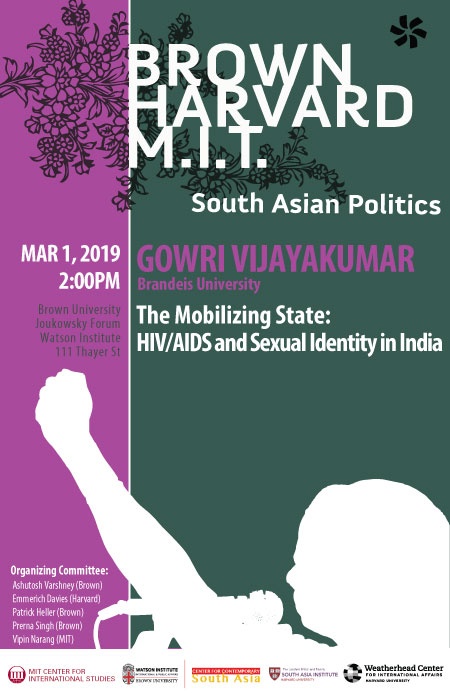 Gowri Vijayakumar is an Assistant Professor of Sociology at Brandeis University. Her research and teaching places gender, sexuality, labor, development, and social movements in transnational perspective. Most of her research focuses on India.

Her current book project uses over 150 in-depth interviews alongside participant observation across India and Kenya to study the transnational circulation of HIV/AIDS programs, focusing on a group at the heart of Indian HIV/AIDS programs: sex workers. The project focuses on how sex worker groups engaged, and often challenged, corporate donors and state agencies, and became central to India's HIV/AIDS response. By tracing differences in HIV/AIDS programs and sex worker activism in Kolkata, Bangalore, and Nairobi, the book theorizes the consolidation and travel of "best practices" facilitated by donors, and examines how they shape, and are shaped by, local gendered political histories.

Professor Vijayakumar is also interested in the shifting politics of gender and labor in urbanizing India. In a previous project, she examined gendered differences in young people’s articulations of their aspirations in relation to the global knowledge economy in a small town outside Bangalore. In future work, she plans to extend her study of gendered labor in Bangalore and its outskirts.