Journalism in the Trump Era: A Conversation with Jim Acosta 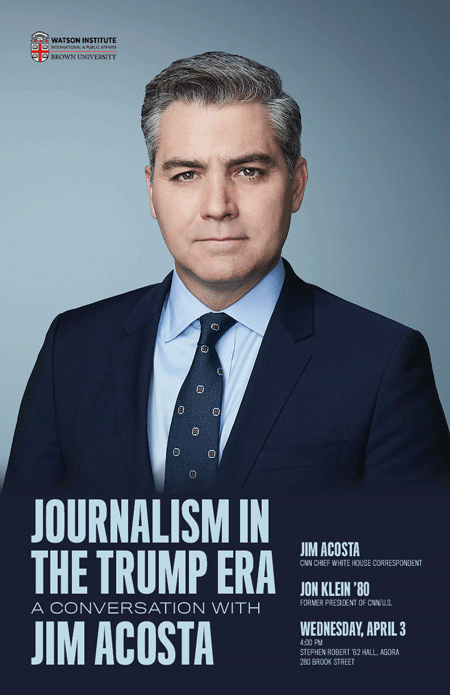 Overflow seating will be available in Stephen Robert Hall, Room 101.

Jim Acosta is CNN chief White House correspondent, currently covering the Trump administration and previously covered the Obama administration from the White House and around the world. He regularly covers presidential press conferences, visits by heads of states, and issues impacting the Executive Branch of the federal government. In addition, Acosta reported from the 2016 campaign trail following Republican presidential candidate Donald Trump.

Acosta is based in the network's Washington, D.C., bureau and serves as a substitute anchor for the network across a variety of CNN programs. Previously, Acosta was national political correspondent throughout CNN's 'America's Choice 2012' election coverage, embedded with the Romney presidential campaign as the lead correspondent. He traveled with the GOP presidential candidate to key battleground states and to the U.K., Israel, and Poland, covering the latest campaign developments. Acosta sat down with Mitt Romney for two one-on-one interviews, breaking several political stories and presidential debate coverage. In addition, he covered both of President Barack Obama's inaugurations and contributed to the network's mid-term election coverage.

In 2009, when the Obama administration lifted some restrictions on American travel to Cuba, Acosta reported from Havana, Cuba, on the effects of the policy change and on the post-Cold War relationship of the United States and Cuba. During the 2008 presidential election, Acosta covered the campaigns of then-Sen. Hillary Clinton, Sen. John McCain and then-Sen. Barack Obama, frequently contributing as co-anchor on CNN's weekend political program, Ballot Bowl. During his time with CNN, Acosta has covered several breaking news stories, including the tragedy at Virginia Tech and the Gulf Coast during the oil spill crisis.

Before joining CNN in March 2007, Acosta was a CBS News correspondent since February 2003. Originally based in New York, he later relocated to the CBS bureau in Atlanta. He contributed primarily to the CBS Evening News and has covered stories including the Iraq war from Baghdad, the 2004 presidential campaign of then-Sen. John Kerry, Hurricane Katrina, and the blackout of 2003 that impacted major cities in the Northeast U.S.

Previously, he was a correspondent for CBS Newspath, the network's 24-hour news service, from 2001-2003 and was based in Dallas and Chicago during that time. Acosta covered the Pennsylvania miner rescue, the Washington, D.C.-area sniper story and the Sept. 11 terrorist attacks, among other stories.

Prior to CBS Newspath, he was a reporter and substitute anchor for WBBM-TV, the CBS-owned station in Chicago from 2000 to 2001; a reporter for KTVT-TV, the CBS-owned station in Dallas, from 1998 to 2000 and a reporter and substitute anchor for WBIR-TV in Knoxville, Tenn., from 1995 to 1998. He began his journalism career with WMAL-AM radio in Washington, before making the transition to television.

Jon is President of Vilynx, an artificial intelligence platform that enables media companies to understand their content and how it is used better than ever before. He is also co-founder and co-chairman of TAPP Media, a subscription video platform for personalities with super-fan followings that is backed by Discovery Communications and Google’s Eric Schmidt. In addition, Jon serves as President of the board of directors of WBRU, helping the student owner/managers navigate their transition from FM station to multi-platform digital workshop.

As President of CNN/U.S. from 2004-2010, Jon revived a struggling brand by integrating technology to support a renewed commitment to in-depth journalism. CNN attained record ratings under Klein’s leadership, doubling profits while winning the most awards in its history, including multiple Peabody, Emmy, and DuPont Columbia honors.

Klein’s innovations include: the first-ever You Tube presidential debate, the first-ever Facebook livestream (Obama’s 2009 inauguration), John King’s “magic” touch screen wall, and integrating Twitter as a newsgathering tool well before any other network; together these initiatives garnered a Peabody Award for CNN’s election coverage. Many of those he hired and showcased, and the franchises he created, remain CNN mainstays today – including Fareed Zakaria, Anderson Cooper, Dr. Sanjay Gupta, CNN Heroes, The Situation Room, State of the Union, and CNN Newsroom.

Jon is a sought-after media analyst and thought leader, frequently appearing in the Op-Ed pages of publications such as the New York Times and Washington Post, and on networks including CNN, Fox News, MSNBC, CNBC, Bloomberg and NPR.