Ling Chen – Manipulating Globalization: The Influence of Bureaucrats on Business in China 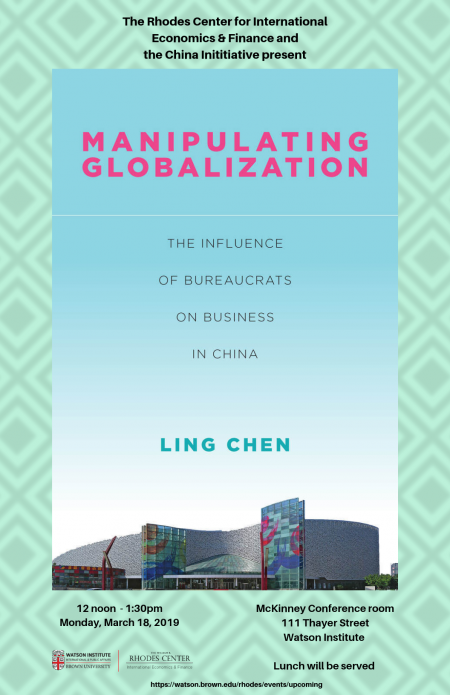 Join us for Ling Chen's discussion of her new book Manipulating Gloablization: The Influence of Bureaucrats on Business in China.

The era of globalization saw China emerge as the world's manufacturing titan. However, the "made in China" model—with its reliance on cheap labor and thin profits—has begun to wane. Beginning in the 2000s, the Chinese state shifted from attracting foreign investment to promoting the technological competitiveness of domestic firms. This shift caused tensions between winners and losers, leading local bureaucrats to compete for resources in government budget, funding, and tax breaks. While bureaucrats successfully built coalitions to motivate businesses to upgrade in some cities, in others, vested interests within the government deprived businesses of developmental resources and left them in a desperate race to the bottom.

In Manipulating Globalization, Ling Chen argues that the roots of coalitional variation lie in the type of foreign firms with which local governments forged alliances. Cities that initially attracted large global firms with a significant share of exports were more likely to experience manipulation from vested interests down the road compared to those that attracted smaller foreign firms. The book develops the argument with in-depth interviews and tests it with quantitative data across hundreds of Chinese cities and thousands of firms. Chen advances a new theory of economic policies in authoritarian regimes and informs debates about the nature of Chinese capitalism. Her findings shed light on state-led development and coalition formation in other emerging economies that comprise the new "globalized" generation.