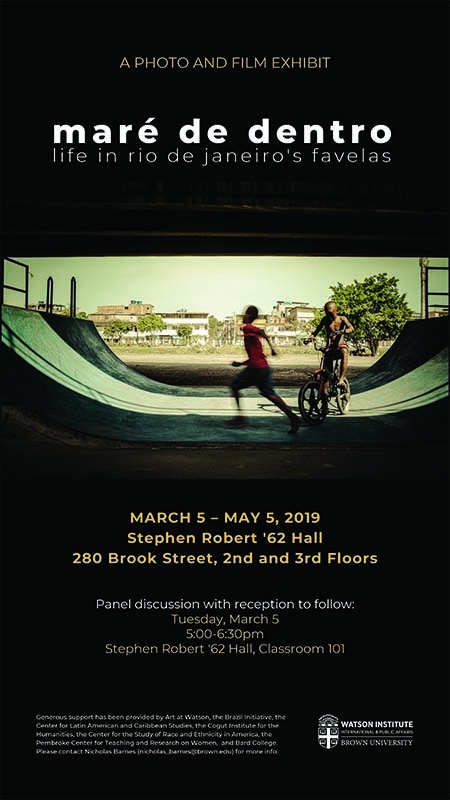 The exhibition incorporates photographic and videographic projects by artists and local Maré activists beginning in 2013. The photographic component builds on the experiences and reflections of the Italian photojournalist Antonello Veneri and Henrique Gomes, a cultural producer and resident of Complexo da Maré. Three documentary films (Occupation, Girl’s Life, and Headbanging in the House of God), produced by Henrique Gomes and Nadia Sussman, an American videographer and photojournalist, deal with daily life in Maré and confront issues of race, identity, and violence. Finally, Maré de Dentro features Andreza Jorge, a black activist and resident of Maré who has been working with social and political movements in the area for 15 years. Jorge uses dance, music, and composition to discuss themes pertinent to the daily life of women living in favelas.

Join Maré de Dentro organizers and participants for a panel discussion on race, gender, and life amid the militarization of Rio de Janeiro's favelas.

Nicholas Barnes is a postdoctoral fellow at Brown University's Watson Institute for International and Public Affairs. He received his PhD in political science from the University of Wisconsin–Madison. His research focuses on urban violence, public security, and non-state governance. He has conducted extensive fieldwork in Rio de Janeiro, and lived for 18 months in Complexo da Maré.

Henrique Gomes da Silva is a black activist and resident of Complexo da Maré. He works with numerous local and international academics, artists, and activists. Silva also coordinates Maré que Queremos, a project which brings together Maré’s neighborhood associations to improve favela conditions, and Espaço Normal, a space for drug users and the homeless.

Antonello Veneri is an Italian photojournalist who has lived and worked in Brazil since 2009. His images and articles have been published in many national and international newspapers and magazines. In 2014, he won the National Geographic Award for Best Feature in Italy, and in 2017 several of his portraits were selected as one of the year's best photo essays by the Felix Schoeller Photo Award. He lives in Salvador, Brazil.

Nadia Sussman is a video journalist at ProPublica. From 2013 to 2017, she was based in Brazil, where she shot and edited videos for outlets including the New York Times, BBC, and the Wall Street Journal. Sussman has worked throughout Latin America and the United States, covering stories about police killings in Rio’s favelas and Brazil’s Zika crisis.

Andreza Jorge is a black feminist, mother, academic, and resident of Complexo da Maré. She has worked with a variety of social projects focused on racial, gender, and sexual identity. She has published numerous articles, short stories, and poems and was named the “highlight” poet of the 2017 International Literary Festival of Paraty. She coordinates Casa das Mulheres, a space for women in Maré.

Stephanie Savell is an anthropologist of militarism, security, and political culture. She co-directs Brown University's Costs of War Project and conducts research on the U.S. war on terrorism. Her other major line of research is on policing and activism in the favelas of Rio de Janeiro, where she has conducted extensive field research since 2008.

The exhibition will be on display on the 2nd and 3rd floors of Stephen Robert '62 Hall from Tuesday, March 5 through Friday, May 3. Exhibit hours are weekdays, 8:30 a.m.-5 p.m.

Arts and Culture
Center for Latin American and Caribbean Studies

Generous support has been provided by Art at Watson, the Brazil Initiative, the Center for Latin American and Caribbean Studies, the Cogut Institute for the Humanities, the Center for the Study of Race and Ethnicity in America, the Pembroke Center for Teaching and Research on Women, and Bard College.